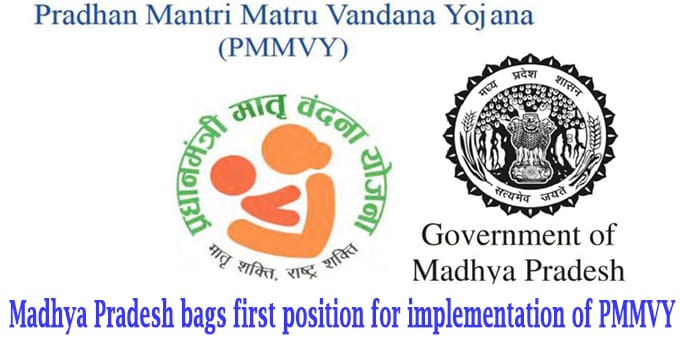 i.MoWCD and Minister of Textiles(MoT) Smriti Irani gave PMMVY awards to best performing states and Union Territories(UT) at a function in New Delhi.

ii.Best performers >1 crore population:  Among states/UTs having more than 1 crore population, Madhya Pradesh (MP) was ranked 1st for best performance since inception of the scheme. MP was followed by Andhra Pradesh and Haryana in the 2nd and 3rd place respectively.

iii.Best performers <1 crore population: Among states/UTs having less than 1 crore population, Dadra & Nagar Haveli ranked 1st. It was followed by Himachal Pradesh and Chandigarh in the 2nd and 3rd place respectively.

i.More than 1 crore population: Indore (Madhya Pradesh) was ranked 1st in the District level awards for States/ UTs with a population of more than 1 crore. Indore was followed by Kurnool (Andhra Pradesh) and South Salmara Mankachar(Assam) in the 2nd and 3rd place respectively.

ii.Less than 1 crore population: Serchhip (Mizoram) was ranked  1st among the districts of States/ UTs having population of less than 1 crore. It was followed by Unain (Himachal Pradesh) and Puducherry in the 2nd and 3rd position.

<1 crore population:  Among the States/ UTs having less than 1 crore population, Dadra & Nagar Haveli ranked first, and was followed by Sikkim and Manipur in the second and 3rd place respectively.

Beneficiaries: Around 1.28 crore beneficiaries received DBT amounting to a total of Rs. 5280 crore. During the MVS from 2nd-8th December 2019, 2.78 lakh applications were received on a single day. The efficiency of programme implementation also improved to 90% in 2019 from 38% in 2018.

Other releases:  A booklet on FAQs(Frequently Asked Questions) and a report on MatruVandanaSaptah- 2019 were released by the Minister during the function.

i.Aim: The aim of the scheme is to provide incentives of Rs. 5,000  for the loss of wages of working women while ensuring proper rest and nutrition during pregnancy or after delivery of the first living child. The incentive will be sent to the bank account directly through Direct Benefit Transfer(DBT).

ii.Cash incentive: The incentive of Rs 5000 is given in 3 installments.