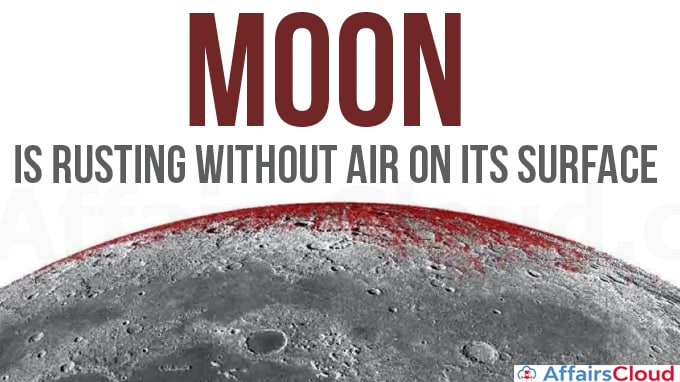 On 2nd September 2020, New research paper titled “Widespread hematite at high latitudes of the Moon” published on Science Advances reviewed the data from the Moon Mineralogy Mapper Instrument(M3) of Chandrayan-1 orbiter of Indian Space Research Organisation(ISRO) and found the Hematite (iron oxide or rust) at the high latitudes of the moon.

Shuai Li from the University of Hawaii was the lead author of the research paper.

ISRO’s Chandrayan-1 mission discovered water and mapped various minerals on the surface of the moon in 2008.

i.M3 is a VNIR imaging spectrometer that collects reflectance data between 0.46 and 2.98 μm at spectral resolutions of 20 to 40 nm and spatial resolution samplings of 140 to 280 m per pixel in global mapping mode.

ii.It was built by the Jet Propulsion Laboratory(JPL) of National Aeronautics and Space Administration(NASA), Southern California.

iii.The water found on the surface reacts with the rocks to produce a range of minerals.

M3 detected the light reflected from the surface of the moon which found that the mineral composition of the moon’s pole is different from the rest of it.

iv.In the polar spectra from M3, Shuai Li found a close match of the spectral signature of Hematite (Fe2O3), mineral in a form of iron oxide(rust) produced by exposing iron to oxygen and water.

Abigail Fraeman and Vivian Sun scientists of JPL stated that the environmental condition of the moon does not support the formation of Hematite and both were convinced that the data of M3 does indicate the presence of hematite at the poles of the moon.

i.The paper provided 3 pronged models to explain the formation of rust on the moon’s surface under such an environment.

ii.The lunar hematite is formed by the oxidation of iron on the moon’s surface by the oxygen hitched from the Earth’s upper atmosphere, travelling 239000 miles (385000 kilometer) to the moon by the solar wind.

iii.The solar wind is a stream of charged particles that hits the surface of the Earth and Moon with Hydrogen which is a reducer (molecule that donates electrons to other molecules), which prevents rusting.

iv.The magnetotail (magnetic field) of the Earth blocks around 99% of the solar wind from hitting the moon for a period of time (full moon phase), which allows the formation of rust.

i.NASA’s JPL is building a new version M3 for Lunar Trailblazer orbiter with High Resolution Volatiles and Minerals Moon Mapper(HVM3) which will map water ice in the permanently shadowed craters of the moon and find the details on the hematite.

ii.India’s Chandrayaan 3, a mission repeat of Chandrayaan-2 which includes a lander and rover similar to Chandrayaan 2 but does not include an Orbiter.

iii.The preparation, training and other processes are in place for India’s first ever Human Space Mission – Gaganyaan and due to the COVID-19 pandemic the steps are to stick to the timeline around 2022.

i.The South African National Space Agency(SANSA) has partnered with National Aeronautics and Space Administration(NASA) to host a deep-space ground station to support human spaceflight missions to the Moon, Mars and beyond.

ii.China has successfully launched a powerful white-large cargo rocket ‘Long March 5B’ and prototype spacecraft towards the space from the Wenchang Space Launch Center on the coast of southern China’s island province of Hainan.