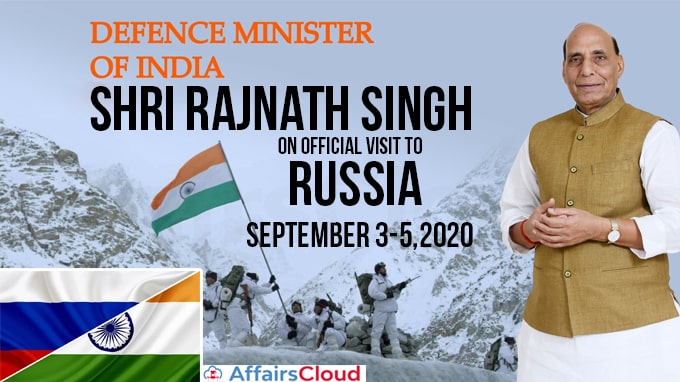 The Union Minister Rajnath Singh, Ministry of Defence (MoD) paid a 3 days visit to Moscow, Russia from September 3-5, 2020 to attend a meeting of the Shanghai Cooperation Organisation (SCO) defence ministers and to hold talks with his Russian counterpart Sergey Shoigu on further boosting bilateral defence cooperation.

Following is the detailed overview of his visit:

On September 4, 2020, Defence Minister Rajnath Singh visited the main cathedral (Church), opened on June 20,2020, of the Russian armed forces and the museum complex in Moscow ahead of a meeting of the Shanghai Cooperation Organisation (SCO).

Key Points with respect to India:

-India is happy with the work of SCO Regional Anti-Terrorism Structure (RATS) to prevent the spread of radicalism and extremism.

-India will continue to support the efforts of the people and Government of Afghanistan for an Afghan-led, Afghan-owned and Afghan-controlled inclusive peace process.

-India’s is committed towards global security architecture which will be open, transparent, inclusive, rules-based and anchored in international laws.

During the SCO meet, Indian defence minister Rajnath Singh met his Chinese counterpart Wei Fenghe to discuss military standoff along the Line of Actual Control (LAC) in early May, 2020. Both nations agreed to peacefully “de-escalate” the situation.

Rajnath Singh’s meeting with counterparts from Uzbekistan, Kazakhstan and Tajikistan

Rajnath Singh left for Iran to meet with Iranian counterpart

On September 5, 2020, Rajnath Singh left for Iran to meet his Iranian counterpart Brigadier General Amir Hatami in Tehran, the capital of Iran, to discuss bilateral ties, and regional security issues. He was the first top Indian official to visit Iran since the outbreak of the coronavirus pandemic.

On July 9, 2020, Defence Minister Rajnath Singh inaugurated six strategic bridges in the border areas close to the International Border (IB) and Line of Control (LoC) in Jammu and Kashmir (J&K) through video conferencing, from New Delhi. These were built in a record time by the Project Sampark of Border Road Organisation (BRO). The total outlay of the following bridges is Rs 43 crore: