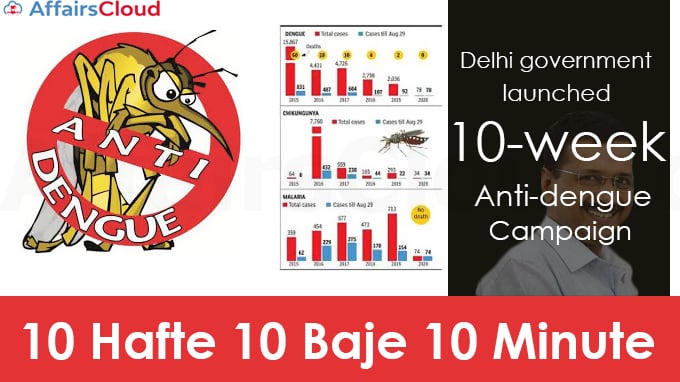 On 6th September 2020, Government of Delhi relaunched the 10-week anti dengue campaign “10 Hafte 10 Baje 10minute” to create awareness on the prevention of the vector borne diseases – dengue and chikungunya among the common people.

i.Under this campaign the residents are advised to check their homes for stagnant clean water on every Sunday from 10 weeks at 10 am for 10 minutes and drain and replace the stagnant water, which is the breeding ground of the Aedes Mosquitoes which spreads dengue, malaria etc.

ii.School children are encouraged to take part in the campaign by assigning them homeworks on behalf of their schools.

iii.In the 2nd week, a doctor will share the do’s and don’ts on the prevention of the dengue.

i.The campaign gathered the support of the celebrities, government officials, social media influencers and others.

ii.They will take part in the campaign by recording and posting the videos of their good practices to prevent the spread of dengue over the social media.

iii.Resident Welfare Associations (RWAs) will also support the combat against dengue and promote the campaign.

i.Delhi Environment Minister Gopal Rai informed that a 17-day campaign “Podhe Lagao, Paryavaran Bachao” (Plant Trees, Save Environment) will be launched from July 10 to July 26 from the National Highway(NH) 20 near ITO to reduce air pollution. During the campaign 31 lakh saplings will be planted.

ii.Delhi Government launched ‘Healthy Body, Healthy Mind’ fitness campaign for students confined in homes because of the lockdown due to COVID-19.