On December 23, 2019 the Union Ministry of Housing and Urban Affairs (MoHUA) announced that the Swachh Bharat Mission-Urban (SBM-U) has achieved the national target of becoming Open Defecation Free (ODF) across the country. Urban areas of 35 states / UTs (Union Territories) became ODF, but it is also to be noted that urban local bodies in West Bengal had not been declared as ODF. 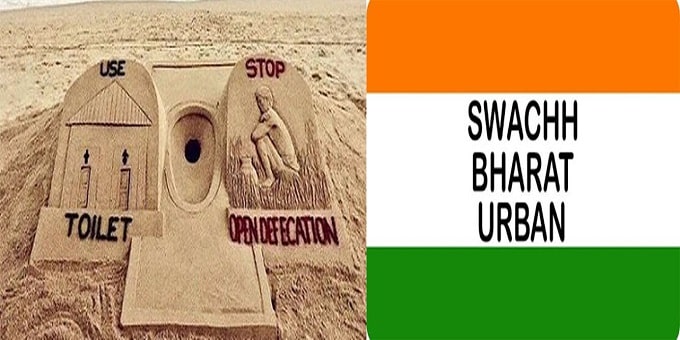 i.Out of 4372 cities, 4320 were declared as ODF. Out of these 4167 cities were certified through third party verification.

iv.Water+ protocol: The MoHUA has also introduced Water + protocol. This protocol was designed to make sure that no untreated wastewater is discharged into the open environment or water bodies.

v.Partnership with Google: The MoHUA has partnered with Google in mapping all public toilets on Google maps. This initiative made it very helpful for the citizens by improving ease of access to sanitation facilities. As of now, 2,300 cities have uploaded more than 57, 000 PTs(Public Toilets) mapped on Google maps, covering more than 50% of India’s urban population.

SBM:
The SBM was launched on October 2, 2014. The SBM-U under SBM has the focus on 100% wastewater treatment and reuse. The mission will also focus on strengthening source segregation, collection, transportation and processing. Some of the achievements of the mission are detailed as below:

i.Solid Waste Management: Till december 23, 2019, 96% of wards have door to door collection of waste, and approximately 60% of the total waste generated is being processed.

iii.Plastic Waste Management: The MoHUA has partnered with several other ministries to control the rising menace of plastic waste. Some of its partnerships include such as

v.Swachh Survekshan(SS): It is an innovative survey conducted by MoHUA under SBM-U. The survey was conducted in the concept of ‘swachhata’(Cleanliness). Cities will be ranked based on sanitation and cleanliness drives.

vi.SS 2020: For the SS 2020 which was launched on August 13, 2019 the MoHUA newly introduced ‘continuous Survekshan’ concept to ensure that the mission outcomes will be sustained through continuous monitoring and verification. The survey will begin from January 4, 2020 and will continue till January 31, 2020.

vii.Capacity Building: Various components of SBM-U has been brought by MoHUA. Some of them in the year 2019 include Advisory on plastic waste management, advisory on emergency response sanitation unit, transforming the urban landscape etc.