The prestigious ‘V Krishnamurthy Award for Excellence’ was presented to eminent scientist and former Director-General of the Council of Scientific and Industrial Research, RA Mashelkar.

Raghunath Anant Mashelkar, also known as Ramesh Mashelkar is an Indian chemical engineer and a former Director General of the Council of Scientific & Industrial Research (CSIR), a chain of 38 publicly funded industrial research and development institutions in India.

The award is instituted by Centre for Organisation Development (COD) to honour individuals who have set high standards of achievement in pursuit of excellence in their respective professions. 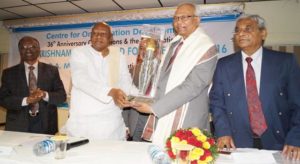