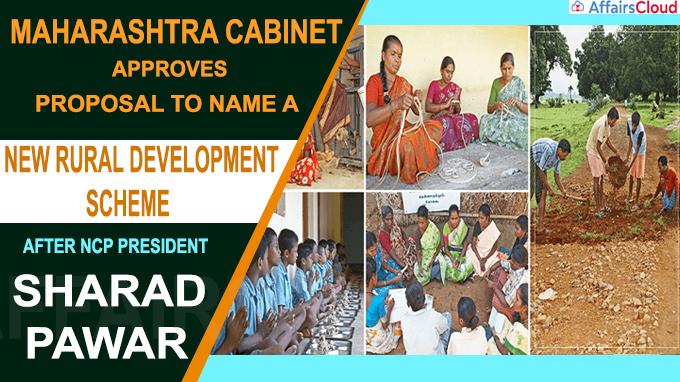 i.To strengthen the law on prevention of atrocities against women, children Maharashtra Cabinet has passed “Shakti Act” which Envisages death sentence for rape, acid attack and child abuse. The act also reduces the investigation period to 15 working days for heinous crimes against womens.

Aim- To create jobs in rural areas and develop permanent assets for personal and public use in gram panchayats and villages, thereby stopping migration from villages due to unemployment.

i.Construction of sheds for cattle, goats and poultry farming.

iii.Central governments MGNRES fund will be utilised through the scheme.

iv.Launched by the state governments as an initiative to double farmer’s income by 2022.

Aim- To reduce the crime against women in the state of Maharashtra by updating changes to the Criminal Procedural Code.

Draft bill passed by the Cabinet will be tabled in the legislature in the winter session starting from 14 December, 2020 for discussion.

The Special Court and Machinery for Implementation of Maharashtra Shakti Criminal Law, 2020.

Highlights of the Law

ii.36 Special courts with special prosecutors for cases with heinous crime against women will be appointed.

Maharashtra has launched a digital platform, http://www.mahasharad.in named after Sharad Pawar to improve access of persons with disabilities to free assistive care devices. By March 2021, MahaSharad app will be launched.

The app will act as a bridge between physically challenged persons in need of equipment with private companies, vendors and people interesting in donating such equipment. It will also provide a platform for registration of those in need for such care.

Department will also launch another mobile application, e-Barti, which is aimed at providing people with easy access of various social welfare schemes being implemented by the Pune-based Dr Babasaheb Ambedkar Research and Training Institute.

i.Born on 12th December, 1940 at Baramati, Maharashtra.Pawar holds the pride of being in public service for over 5 decades.

ii.He served thrice as the Chief Minister of Maharashtra

iii.In 1991, Under the Prime Ministership of P.V Narashima Rao he served as the Defence Minister of India.

iv.Later in 2004, Under PM Manmohan Singh, Pawar served as the Agriculture Minister of India and Ministry of Consumer Affairs, Food and Public Distribution.

v.Other than this there are many honorable posts holded by Pawar in his career including the Leader of Opposition in Lok Sabha.Pawar currently serves as Member of Rajya Sabha since 2014.

vi.Maharashtra Vikas Aghadi is a state-level political coalition formed after the 2019 Maharashtra Legislative Assembly election under the leadership of Sharad Pawar of the NCP, Uddhav Thackeray of Shiv Sena and Sonia Gandhi of the INC, along with the support from the SP, PWPI, Prahar Janshakti Party and several other political parties including Independent MLAs.

i.The Disha Act, or the Andhra Pradesh Disha Act Criminal Law (AP Amendment) Act, 2019, amends the Indian Penal Code and the Code of Criminal Procedure (CrPC) to speed up the investigation and trial in cases of sexual offences, and hand out the death penalty in cases with adequate, conclusive evidence.