On January 17, 2020 the Union Minister of Law and Justice (MoL&J) Shri Ravi Shankar Prasad inaugurated the Centre of Excellence (CoE) in Blockchain Technology set up by the National Informatics Centre(NIC) in Bengaluru, Karnataka. The CoE has been set up with the aim of providing blockchain as a service and help all stakeholders to benefit from shared learning, experiences and resources. 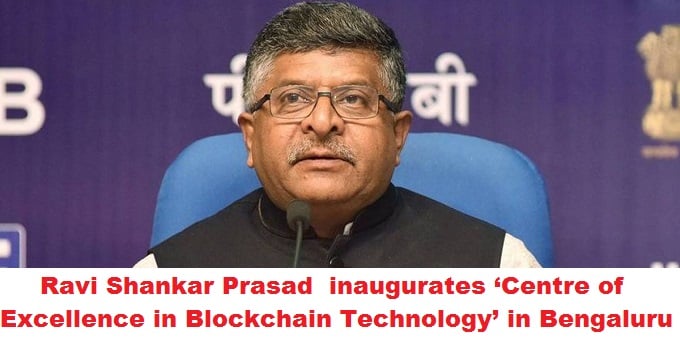 i.CoE function:  The CoE which has developed Blockchain based Proof of Concepts (PoCs), will facilitate govt buildings to use the blockchain technology for deployment of large scale applications. With the support of NIC, the CoE will also provide Blockchain as a Service (BaaS) for hosting the Blockchain network efficiently.

ii.CoE operations: The CoE is expected to begin its operations by March 2020.

iii.Plans for another CoE: Apart from CoE in Bengaluru, the govt is also planning to launch another CoE for blockchain technology in Gurugram, Haryana also.

iv.NIC: It acts as technology advisor and Information and Communications Technology(ICT) solution provider to govt.

v.Works of NIC so far: NIC took the 1st step in introducing various initiatives. These include the introduction of ICT in Government, establishment of NIC-NET( satellite-based nation-wide computer-communication network) or National Knowledge Network (NKN), development of critical e-Governance solutions etc.

vi.Blockchain technology: Blockchain means growing list of records called blocks which will be linked with cryptography. It will be helpful in sectors such as health, finance, agriculture etc.