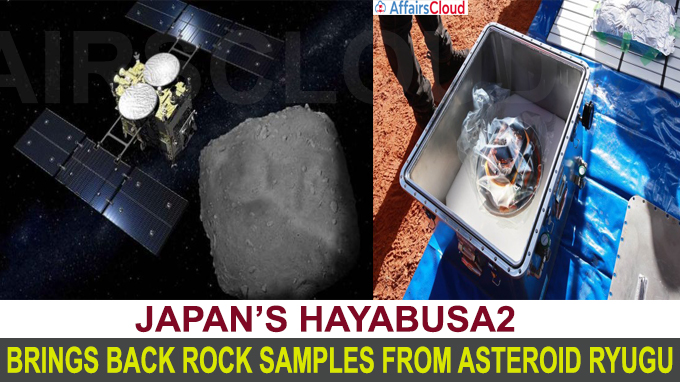 On December 6, 2020, A small capsule containing First rock samples from beneath the surface of Asteroid ‘Ryugu’ landed at Woomera in South Australia, it was released by Japanese Spacecraft Hayabusa 2. The samples are expected to provide clues regarding the origin of the solar system & life on our planet.

i.Japanese Aerospace Exploration Agency (JAXA) stated that this is the 1st time that an international spacecraft has visited a celestial body which is under 100 metres in diameter.

ii.The capsule was sent by Hayabusa2 from about 300 Million Kilometres (180 Million Miles).

ii.The samples will be shared with JAXA, NASA (National Aeronautics & Space Administration, United States) and other international organisations. They will be used for future studies regarding analytic technology.

iii.The predecessor of Hayabusa 2 – Hayabusa had collected samples from the asteroid Itokawa in 2010.

v.Ryugu Asteroid was discovered in 1999 and it is 300 Million Kilometres from the Earth.

In October, 2020, NASA’s OSIRIS-REX (Origins, Spectral Interpretation, Resource Identification, Security-Regolith Explorer) had successfully collected samples from the Asteroid Bennu and is expected to return to earth by March 2021.

i.Asteroid samples are essential for studying the origin of water as well as origin of life on earth.

ii.Asteroids are rocky objects that orbit the sun, they are smaller than planets and are called “minor planets”.

i.On July 30, 2020, the United States’ (US) 5th Mars Mission “Mars 2020” initiated by NASA, it aims to seek signs of ancient life and collect first Martian rock and soil samples for possible return to Earth for analyzing and will be retrieved during future missions in 2031.