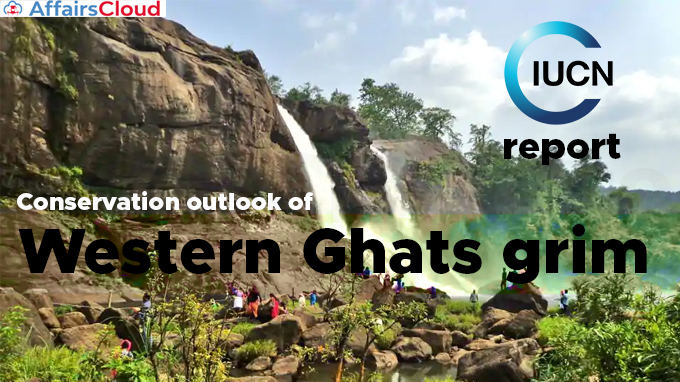 In accordance with the new report by the International Union for Conservation of Nature (IUCN) namely “IUCN World Heritage Outlook 3”, India’s Western Ghats, inscribed by UNESCO (United Nations Educational, Scientific and Cultural Organization) in 2012 as a natural world heritage site, is threatened by population pressure, urbanization and climate change. The site is regarded as of significant concern.

The assessment of the report was based upon the previous reports from 2014 and 2017. The report has covered 252 natural World Heritage sites, as of November 2020.

What is the concern about Western Ghats?

The fragmentation caused by development pressure in the Western Ghats is decreasing the availability of wildlife corridors and suitable habitats outside protected areas. The development of new road construction, broadening of existing roads, power production, urbanization, climate change, agricultural expansion, livestock grazing are among the key factors posing threat to the site.

–According to UNESCO, Western Ghats is home to some of the best non-equatorial tropical evergreen forests and have at least 325 globally threatened flora, fauna, bird, amphibian, reptile and fish species.

ii.Delhi-Mumbai expressway will have India’s first five animal overpass or “animal bridges” with a combined length of over 2.5 km for safe passage of wildlife. These bridges are inspired from the Wildlife crossings in the Netherlands.