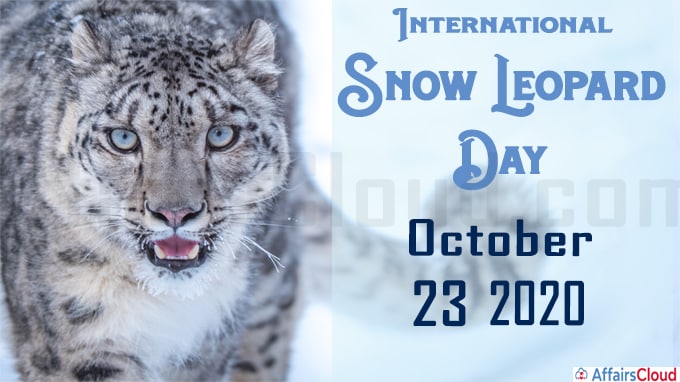 International Snow Leopard Day is annually celebrated across the globe on the 23rd October to create awareness about the conservation and preservation of Snow Leopards, the majestic wild cats which are listed among the most threatened animals.

The first ever International Snow Leopard Day was observed on 23rd October 2014.

i.The snow leopard range states have agreed to work under GSLEP to identify and secure around 20 snow leopard landscapes across the states by 2020 – “Secure 20 by 2020”.

The region with a minimum of 100 breeding age snow leopards covered by the local communities and with adequate support and secured prey population.

The NSLEP was developed to incorporate the set of priority, project activities to achieve the goals and collectively achieve the global goal.

The commitments of the Bishkek Declaration are,

About the Snow Leopards:

i.The Snow Leopards are mostly found in central Asia which are adopted to a cold and dry climate.

ii.The population of these snow leopards are deteriorating due to the decrease in habitat, poaching, human animal conflict and climate change.

iii.The snow leopards are listed under the Appendix I of the Convention on Migratory Species of the Wild Animals.

iv.The status of the snow leopards was elevated to “Requiring concerted Action” in 2002.

i.The World Wildlife Fund(WWF) is working with the communities of the Kanchenjunga conservation area, Nepal to reduce the human animal conflict in this region.

ii.The Indian government identified the snow leopards as a flagship species for the high altitude of Himalayas due to the importance of this landscape which is estimated to provide ecosystem services worth around 4 billion USD per year.