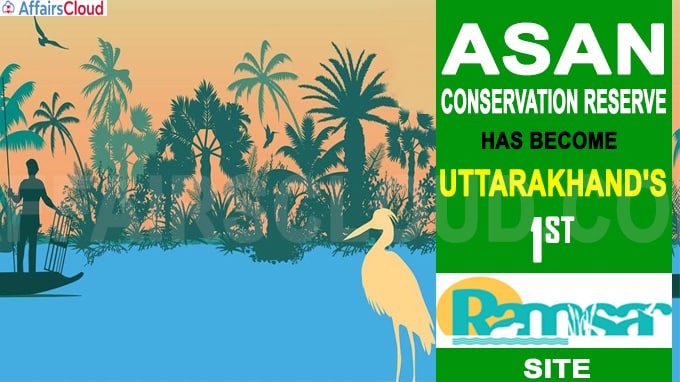 On October 15, 2020 The Ministry of Environment, Forest and Climate Change announced that Ramsar Convention has declared The Asan Conservation Reserve(ACR) in Dehradun as a site of international importance. ACR has been included in the ‘List of Wetlands of International Importance’ established by Article 2.1 of the convention

i.This is the first wetland from Uttarakhand, to be recognised by Ramsar.

i.5 out of 9 criteria have been cleared by Asan Conservation Reserve, which was needed  to be declared as a Ramsar site.

ii.The certificate of declaration was issued by Martha Rojha Urrego, secretary general of Ramsar Convention on Wetlands, but the official announcement was made on October 22, 2020.

i.Asan Conservation Reserve spread in around 59.05 hectares of land on the banks of Yamuna river.

ii.It is home to over 330 species of birds. It hosts threatened and critically-endangered species like white-rumped vulture (gyps bengalensis), ruddy shelduck and  Baer’s pochard (Aythya baeri)

Zoological Survey of India, in its 2013 report has  ascertained the richness of this wetland and also  noted that it has a presence of 78 species of invertebrates, 40 species of fishes, 20 mammal species, four amphibians and one reptile.

i.The Ramsar Convention was signed in 1971 in Ramsar, Iran. On February 1, 1982, the convention came into force in India.

ii.It aims to create a global network of wetlands to preserve biological diversity in order to sustain human life.

iii.It is considered as one of the oldest inter-governmental accord for preserving the wetlands.

iv.The name of the Convention is usually written “Convention on Wetlands’’.

v.The wetlands which are of international importance are declared as Ramsar sites.

It is to be noted that Uttarakhand has about 178 wetlands