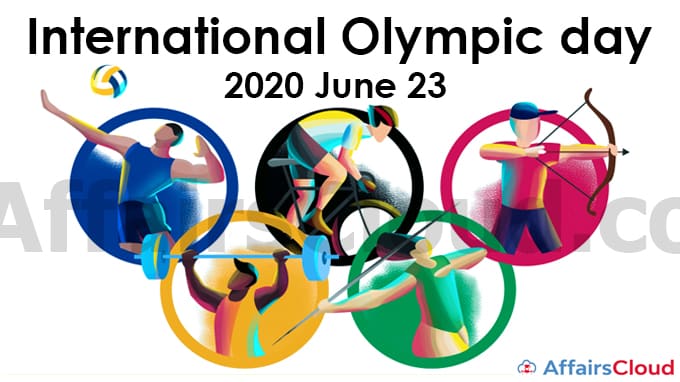 23rd June is marked as the International Olympic Day and observed all over the world by the Olympians, athletes and fans who participate in the sports activities. The first Olympic Day was hosted by the National Olympic Committees(NOC) of Austria, Belgium, Canada, Great Britain, Greece, Portugal, Switzerland, Uruguay, and Venezuela in their respective countries on June 23, 1948.

Note: Due to pandemic the events of 2020 Olympic day will be conducted as an online event.

i.The proposal for the celebration of World Olympic Day was made by Doctor Gruss in the 41st Session of the International Olympic Committee(IOC) in Stockholm in 1947 to promote the idea of the Olympics.

ii.June 23rd is designated as the International Olympic Day in 1948 to commemorate the initiation of the Modern Olympic Games on 23rd June 1894 in Sorbonne, Paris, France.

On Olympic Day 2020, The World Health Organization (WHO) and the International Olympic Committee (IOC) advocates #BeActive in day-to-day routine and participate in the world’s largest 24-hour live digital workout. IOC’s #StayStrong, #StayActive, #StayHealthy campaign by sharing their daily workouts and uplifting tips on how to stay healthy in body and mind.

i.All over the world, for the last 2 decades, the Olympic day was associated with the Olympic day runs launched in 1987 to encourage the NOCs to celebrate and promote mass sport practice.

ii.Nowadays in addition to the run the Olympic day is based on the three pillars, Move, Learn and Discover, the NOCs has incorporated the events into the curriculum and added concerts and exhibitions to the celebration.