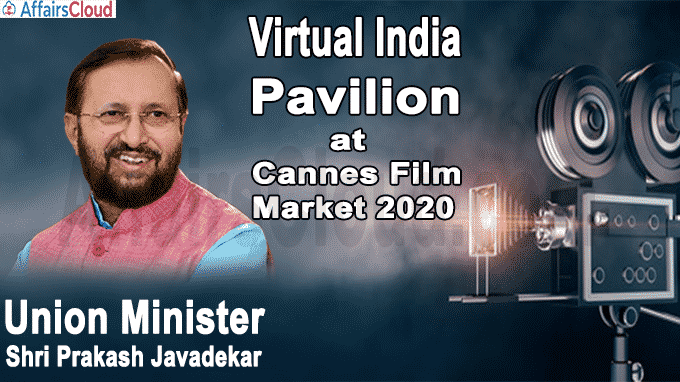 The e-inauguration of the Virtual India Pavilion at Cannes Film Market 2020 was done by Minister of Information & Broadcasting Prakash Javadekar. He also unveiled the booklet and poster of the 51st International Film Festival of India (IFFI), which is scheduled to take place from November 20 to 28, 2020 in Goa.There are couple of first time events in the participation this year.They are,

The National Film Development Corporation (NFDC) Film Bazaar, the largest film market of South Asia, collaborated with the biggest international market, Marché du Film 2020 for ‘NFDC Film Bazaar Goes to Cannes’ programme. The Goes to Cannes programme 2020 is the 8th edition and is one of the premier events at the Cannes Film Market taking place on June 22-23. As a part of this collaboration, five work-in-progress films from NFDC Film Bazaar 2019 will be pitched at the Marché du Film Online, which are as follows:

What is Indian Pavilion?

Through Indian Pavilion at Cannes, Indian film makers and delegates interact with the international community for exploring the opportunities of working with Indian film makers and to shoot within India. The Website will also make available the data on film shooting in India, producers who have experience in co-production as also a list of producers who are interested in linkages with international media and entertainment industry.The website of the Pavillion can be accessed at www.indiaatcannes.in