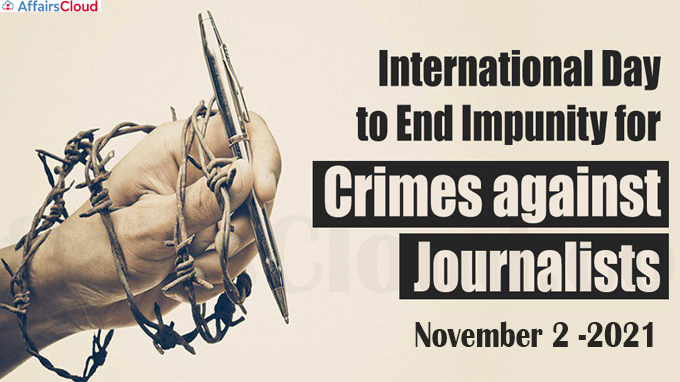 United Nations(UN)’s International Day to End Impunity for Crimes against Journalists(IDEI) is annually observed across the globe on 2nd November.The day aims to create awareness and to formulate ways to counter the threats of violence and crimes against journalists to protect the freedom of expression for all.

i.The United Nations General Assembly(UNGA) adopted the resolution A/RES/68/163 on 18th December 2013 and proclaimed the 2nd November of every year as the International Day to End Impunity for Crimes against Journalists.

ii.The first ever International Day to End Impunity for Crimes against Journalists was observed on 2nd November 2014.

The date, 2nd November, was chosen to commemorate the assassination of Claude Verlon and Ghislaine Dupon, French journalists at RFI radio, in Mali on 2nd November 2013.

#TruthNeverDies is a joint campaign developed by The United Nations Educational, Scientific and Cultural Organization(UNESCO) and DDB Paris to commemorate the International Day to End Impunity for Crimes against Journalists.

With the support of UNESCO, Ossigeno per l’informazione has organised a hybrid format high-level roundtable discussion which will be held on 3rd November 2021 at the Syracuse International Institute for Criminal Justice and Human Rights in Syracuse, Italy.

ii.According to the data collected in 2021, the rate of impunity is continuing at 87%.Most of the killed journalists are killed in their country of nationality and among the 400 journalists killed from 2016 to 2020, 22 (6%) were foreigners.

Maria Ressa, Chief Executive and co-founder of online news outlet Rappler, from the Philippines and Dmitry Muratov, cofounder and editor-in-chief of Novaya Gazeta newspaper, from Russia were named as the  2021 Nobel Peace Prize laureates.