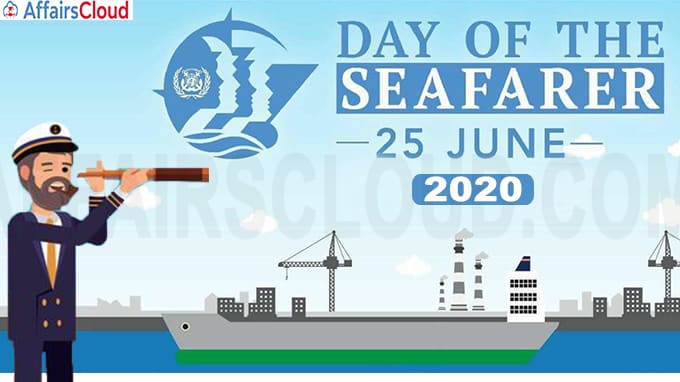 The International Day of the Seafarer is observed annually on June 25 as a tribute to the Seafarers and sailors who are essential to global trade and transport. The day aims to raise awareness about the dangers of sea travel, like piracy. This year marks the 10th edition.

About 2020 Campaign- Seafarers are key workers

i.The 2020 campaign is: #SeafarersAreKeyWorkers & the aim is to raise awareness of their work in response to the pandemic and to thank them for their contribution.

ii.The campaign calls on Member States to acknowledge seafarers as key workers and also to provide them the support, assistance and travel options during the pandemic.

iii.The campaign also encourages everyone to treat seafarers with the respect and dignity they deserve.

i.The day was 1st introduced in 2010 by the International Maritime Organization (IMO).

ii.The day was established through a resolution by the Conference of Parties that held in Manila, Philippines, in June 2010 which adopted the International Convention on Standards of Training, Certification and Watchkeeping for Seafarers(STCW), 1978.

iii.Now, the Day has been included in the annual list of United Nations Observances.

Significance of the day- IMO discusses issues like sailor rights at foreign ports and also about the safety of sea travel.

Seafarers on COVID-19-​ Seafarers play a vital role in maintaining the flow of vital goods, such as food, medicines and medical supplies.