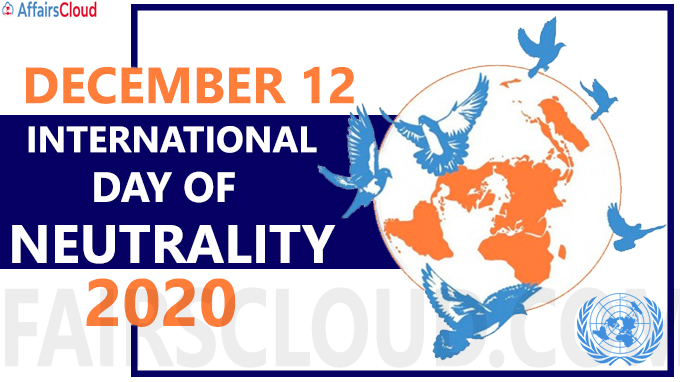 The United Nations(UN)’s International Day of Neutrality is annually observed across the globe on 12th December to promote neutrality among countries and to highlight the importance of peace and develop mutually benefiting relationships between countries.

i.The United Nations General Assembly adopted the resolution A/RES/71/275 on 2nd February 2017 and proclaimed the 12th December of every year as the International Day of Neutrality.

i.The Article 2 of the UN Charter requires the member states to settle the international dispute among them through peaceful means and to hold back from threats or use of force in any form in their relations.

ii.The resolution recognised the national policies of neutrality of some states which can contribute to enhancing international peace and security and play a vital role in developing mutually beneficial relations between countries.

The International law defines neutrality as the legal status of a country which abstains from all participation in any armed conflict between other states.

i.Preventive Diplomacy means “To take diplomatic actions to prevent disputes from escalating into conflicts and to limit the conflict from spreading.

ii.The common expression of preventive diplomacy is found in the efforts of envoys dispatched to crisis areas to encourage compromise and peaceful resolution of tensions.

i.Mediation is a process in which the parties involved in a dispute discuss with assistance of an impartial 3rd party to reach a settlement.

ii.Mediation requires support from the system to provide the 3rd party with required staff assistance, advice and to ensure that the talks have all the required logistical and financial resources.