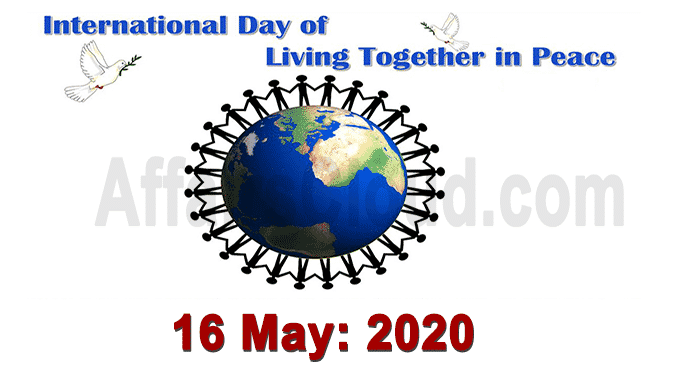 The International Day of Living Together in Peace is celebrated every year on May 16th since 2018 with an aim to uphold the desire to live and act together, united in differences and diversity, in order to build a sustainable world of peace, solidarity and harmony.

i.The Day invites countries to further promote reconciliation to help to ensure peace and sustainable development, including by working with communities, faith leaders and other relevant actors, through reconciliatory measures and acts of service and by encouraging forgiveness and compassion among individuals.

ii.The United Nations General-Assembly, in its resolution declared the day in 2017 as a means  to regularly mobilize the efforts of the international community to promote peace, tolerance, inclusion, understanding and solidarity.

i.The general assembly in its resolution in 2000 proclaimed as the “International Year for a Culture of Peace”

ii.It Proclaimed the period 2001-2010 as the “International Decade for a Culture of Peace and Non-Violence for Children of the World.” in 1998

iii.In 1999, The General-Assembly adopted, by a resolution, ‘the Declaration and Programme of Action on a Culture of Peace’ serves as the universal mandate for the international community, particularly the UN system, to promote a culture of peace and non-violence that benefits all of humanity, including future generations.

iv.The Declaration also recognizes that to fulfill such an aspiration, there is a need to eliminate all forms of discrimination and intolerance, which include those based on race, color, sex, language, religion, political or other opinion, national, ethnic or social origin, property, disability, birth or other status.