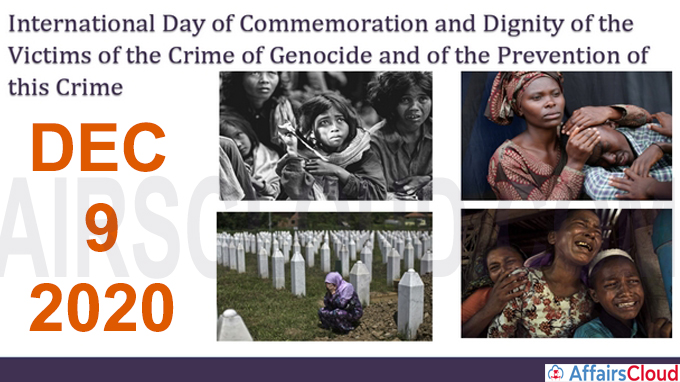 The 9th December 2020 also marks the 72nd anniversary of the adoption of the 1948 Convention on the Prevention and Punishment of the Crime of Genocide the “Genocide Convention” by the United Nations General Assembly(UNGA).

The day is aimed to create awareness about the Genocide Convention and its importance in preventing the crime of genocide and genocidal conflicts.

The United Nations General Assembly adopted the resolution A/RES/69/323 on 11 September 2015, and proclaimed the 9th December of every as the International Day of Commemoration and Dignity of the Victims of the Crime of Genocide and of the Prevention of this Crime.

Three million people killed and hundreds of thousands of women raped by the Pakistan Army and religious militias in the 1971 Liberation War.

i.As a part of the observance of the International Day of Commemoration and Dignity of the Victims of the Crime of Genocide and of the Prevention of this Crime, The United Nations has organised a spectial online event on 9th December.

ii.The event is in line with the UN75 initiatives and commitments to promote peace and prevent conflicts.

“Genocide” was first coined by Polish lawyer Raphäel Lemkin in 1944 . It consists of the Greek prefix genos, meaning race or tribe, and the Latin suffix cide, meaning killing.

i.The Genocide Convention defines Genocide as “acts committed with intent to destroy, in whole or in part, a national, ethnical, racial or religious group”.

iii.Since no country is completely homogenous, the genocide is considered as a global challenge.

i.The Genocide convention established that genocide, committed either in the time of peace or in time of war, as crime under the International law.

ii.The state holds the responsibility to prevent and stop the practice of genocide within the state.

The main measure to prevent genocide are

Responsibilities of the Member states to Protect their people from Genocide:

i.At the World Summit held in 2005, The member states of the United Nations committed to protect their people from genocide, ethnic cleansing and other crimes against humanity.

ii.The states agreed that when they require any form of assistance to protect its people from these crimes, the international community will provide assistance to them.

iii.If the states fail to protect its citizens the international community will take required action in accordance with the United Nations Charter.

Office on Genocide Prevention and the Responsibility to Protect:

ii.The mandate of these 2 advisors are different but they are complementary to each other.

Alice Wairimu Nderitu of Kenya was appointed as the Special advisor on 10th November 2020.

Karen Smith, a South African citizen, was appointed as the Special advisor in January 2019.