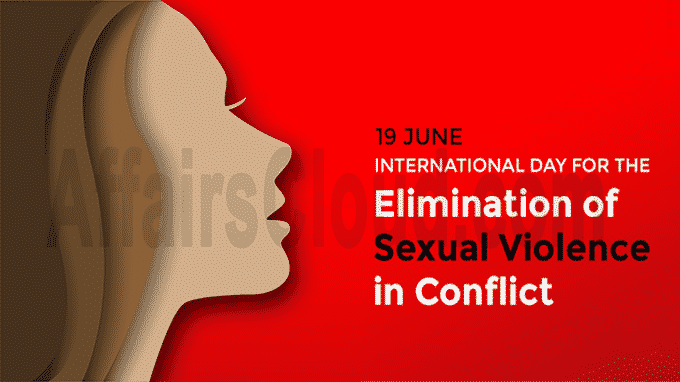 19th June 2020 marks the 6th international day for the elimination of sexual violence in conflict which is observed every year to create awareness about the conflict related sexual violence. The day was established by the United Nations General Assembly(UNGA) in 2015.

Note – There is no theme for International Day for the Elimination of Sexual Violence in Conflict 2020.

The impact of COVID-19 on survivors of CRSV:

i.COVID-19 hampers the possibility of survivors to report sexual violence and further exacerbates the existing structural, institutional and sociocultural barriers to reporting such crimes.

ii.The pandemic deprioritized the shelter, healthcare, police and judicial services that are required by the survivors of CRSV.

iii.The fear of the spread of virus prevents the survivors from reporting and accessing the provided services.

iv.The monitoring, reporting and outreach of senior women protection and child protection advisers and the UN mandates against CRSV has been disrupted due to restriction of movement and quarantine.

i.The Office of the Special Representative of the Secretary-General(SRSG) on Sexual Violence in Conflict, the Office of the SRSG for Children and Armed Conflict and the Permanent Mission of Argentina to the United Nations hosts the events of 2020 as a virtual event due to the pandemic.

ii.The event is aimed to provide the outline of the implications and consequences related to the effects COVID-19 on the survivors and to deliver the CRSV mandate and the works of the United Nation.

ii.June 19th was chosen to commemorate the resolution 1820(2008) adopted by the Security Council on 19th June 2008 to condemn the sexual violence as an hinderance to peacebuilding.