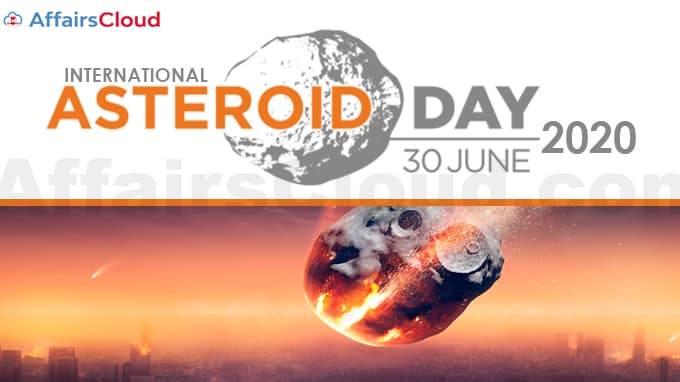 To inform the public about the crisis communication actions to be taken at the global level in case of a credible near-Earth object threat.

ii.June 30th is chosen to observe the international anniversary of the impact of “Tunguska” over Siberia, Russian Federation on 30th June 1908.

iii.The proposal for the International Asteroid day was made by the Association of Space Explorers, supported by the Committee on the Peaceful Uses of Outer Space (COPUOS).

i.The Siberia Tunguska is the Earth’s largest asteroid impact in recorded history which affected an estimated 80 million trees over the 2150 square kilometer area.

ii.The Tunguska asteroid did not create an impact crater on the crash site and it is assumed that the asteroid disintegrated around 5 to 10 km above the surface of the earth.

i.Asteroids are the heavenly bodies that are the residues of the Big Bang which failed to evolve into a minor planet.

ii.The Asteroids are found in the region between the orbit of Mars and Jupiter.

i.The Near Earth Objects (NEO) is an asteroid or comet that passes at a close range to the orbit of Earth.

iii.The NEO poses a potential threat to the Earth.

i.The United Nations Office for Outer Space Affairs(UNOOSA) has studied and recognised the hazardous impacts of the NEO’s as a global threat.

ii.The International Asteroid Warning Network(IAWN) and the Space Mission Planning Advisory Group(SMPAG) were established in 2014 on the recommendation supported by the Committee on the Peaceful Uses of Outer Space(COPUOS) to form an international response to face the NEO threats.

IAWN uses communication plans and protocols to support the governments to analyse the impacts of the asteroids and to support the planning of mitigation responses.

SMPAG is an inter-space agency to take planetary defence measures and to identify the required technologies.