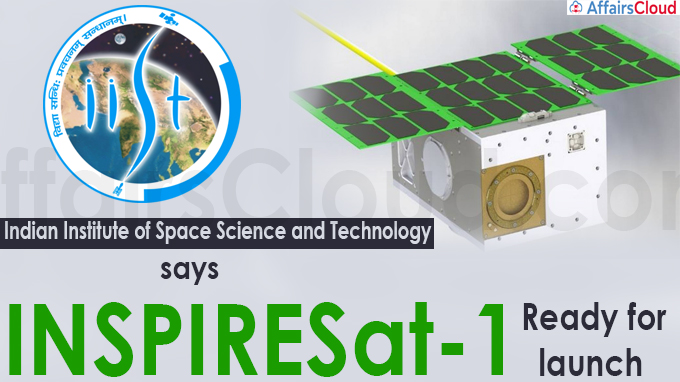 In accordance with the Indian Institute of Space Science and Technology (IIST), the INSPIRESat-1 CubeSat, developed under the International Satellite Program in Research and Education (INSPIRE) is all set for launch through an upcoming Polar Satellite Launch Vehicle (PSLV) mission of the Indian Space Research Organisation (ISRO).

What will INSPIRESat-1 CubeSat do?

It is equipped with a Compact Ionosphere Probe which will study earth’s ionosphere. A constellation of earth and space-weather observation satellites is also envisaged under the INSPIRE program.

ii.INSPIRESat-1 is a joint effort by the Laboratory for Atmospheric and Space Physics (LASP) at the University of Colorado Boulder in the US (United States), the National Central University, Taiwan, the Nanyang Technological University in Singapore, and the IIST.

iii.Its computer and electrical power supply were designed and developed by students of IIST.

iv.The INSPIRESat-1 mission was originally planned for 2020, but was delayed due to the COVID-19 pandemic.

On September 6, 2021, the Chairman of ISRO Kailasavadivoo Sivan inaugurated a 2-day Lunar Science Workshop 2021, to commemorate the completion of two years of operation of Chandrayaan-2 spacecraft around the lunar orbit. It was organized by ISRO.

The data can be analyzed by the academia and institutes for a greater participation to look for scientific details from the Chandrayaan-2 mission.

In August 2021, ISRO launched its most advanced Geo-Imaging Satellite ‘EOS-3’ that is capable of near-real time monitoring of natural disasters like Floods & Cyclones.

About Indian Institute of Space Science and Technology (IIST):

It as an autonomous body under the Department of Space, Government of India
Director– S. Somanath
Headquarter– Thiruvananthapuram, Kerala