Indian Naval Ships Satpura and Kadmatt are visiting Sasebo, Japan from 12th to 15th October 2017. The visit of these ships is in line with India’s Act East Policy and reiterating of India’s commitment to peace and stability in the Indo-Pacific Region. 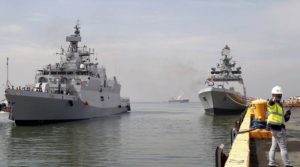 During this visit, INS Satpura and INS Kadmatt will engage with Japan Maritime Self-Defense Force (JMSDF) in formal calls, as well as social and sporting interactions.

‘Navy to Navy Staff Talks’ between Japan and India started in November 2008. Since then, the two navies have taken part in several bilateral as well as multilateral exercises and have developed enhanced cooperation in information sharing, meteorology and oceanography, disaster management and military training.

Strong naval relations between India and Japan can be ascribed to regular bilateral and multilateral maritime exercises.