On January 10, 2020, According to the Index of industrial production (IIP) data released by the National Statistical Office (NSO) of the Ministry of Statistics and Programme Implementation (MoSPI), Growth in manufacturing sector has resulted in 128.4 in November 2019, which is 1.8 % higher as compared to the level 126.1 in the month of November 2018 .The result turning positive after 3 consecutive months (August to October 2019) of decline. 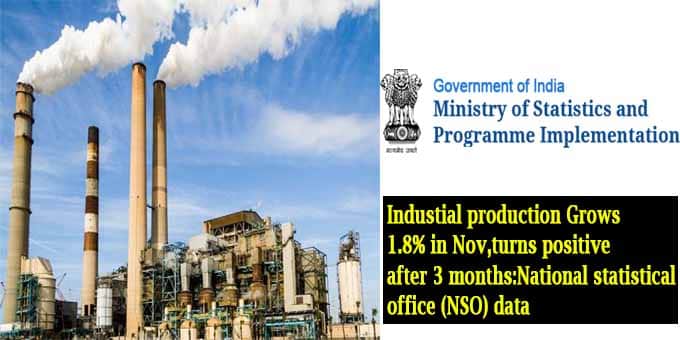 Here the manufacturing category except for furniture, the industry which made wood and cork products and straw etc made the most growth of 23.2 % followed by basic materials, which has increased by 12.9 %.

iv.Use-based classification:
According to the data, capital goods production declined by 8.6 % in November 2019 from 4.1 % in November 2018.
The infrastructure and construction materials category fell by 3.5 %.
However, Consumer non-durable goods grew by 2 % in November 2019. Whereas, the Consumer durables has recorded declined growth of 1.5 % .

v.The data of the industry sector gaining some momentum & is a relief for the market and policy makers.

About IIP:
It is an abstract number represents the status of production in the industrial sector for a given period of time as compared to a reference period of time. The current base year is 2011-2012.