On January 10, 2020, In view of the promotion of digital payments, India’s central bank, the Reserve Bank of India (RBI) has permitted processing of e-mandate for recurring payments through UPI (Unified Payments Interface).
This direction has been issued under Section 10 (2) read with Section 18 of Payment and Settlement Systems Act, 2007 (Act 51 of 2007). 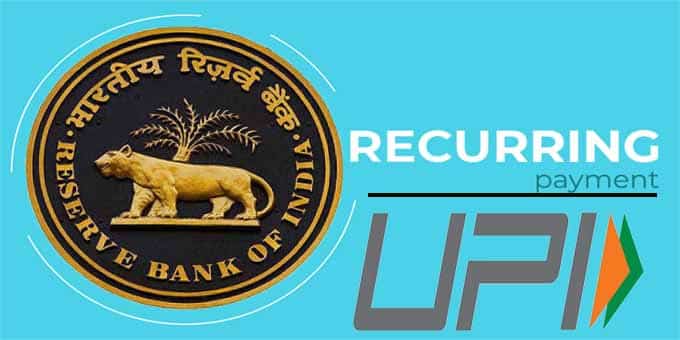 ii.Under this facility, an agreement is formed between the consumer and the merchant bodies and the payment of the outstanding dues is done automatically on the fixed date of the month. However, the maximum permissible limit under this payment system shall be Rs 2,000 per transaction.

E-mandate: It is called the consent to the process of payment by means of message or e-mail, etc., without the presence of consumers before the merchant while making payment.

It is to be noted that the facility of automatic recurring payment is usually used to pay other utility bills including mobile, internet, or making lump sum payments on monthly basis in shops.

i.Powers of RBI to impose fine: Under the revised framework,RBI has provision to levy  monetary penalty levied for a contravention shall not exceed Rs 5 lakh or double the amount of contravention or default, whichever is higher, where such amount is quantifiable.
For non-quantifiable contravention, the maximum penalty imposed by RBI shall be Rs 5 lakh per contravention.
In addition, RBI will impose further penalty up to ₹ 25,000/- for every day, if such contravention / default is a continuously performed.

ii.Payment of penalty: The penalty should be paid within a period of 30 days from the date of the order issued by RBI.
In case of failure in payment, RBI will take further action against the contravener as per Section 8 or Section 30 (3) or Section 33 of PSS Act.

Note: The above said contravention/ Defaults defines the following activities

i.When the payment system functions without authorisation by RBI.

ii.When it is failed to comply with the norms subject to which authorisation was issued by RBI & failed to pay the penalty imposed by RBI.

iii.When it intentionally submit a false statement of information or omission to submit a material statement in any application for authorisation or return or other document.

iv.Not complying with the norms to produce any statement, information, returns or documents or failed to disclose any prohibited information.

v.When it failed comply with any provisions of the Act or of any regulation, order or direction made or given thereunder, in respect of which no penalty has been specified.