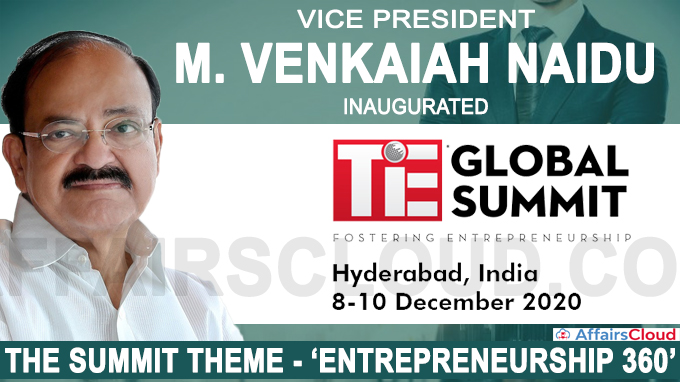 i.Union Minister Nitin Gadkari stated that India is set to increase MSMEs contribution to the Gross Domestic Product (GDP) of India by 50 % from the current 30%.

ii.At present, MSME contributes 48% of total exports from India, and the government is planning to increase it to 60% in the future.

iii.MSME sector has generated around 11 crore jobs and government is planning to generate 5 crore jobs in the sector.

iv.Village industries like handlooms, handicrafts, Khadi Gram Udyog which generate around INR 80, 000 Crore Revenues will be scaled up to increase revenue to INR 5 Lakh Crore in the future.

Nitin Gadkari stated that the Government will take up around 22 new green highway road projects across India.

Research works are going on to use hydrogen fuel cells as alternative sources of energy for automobiles.

During the summit, Delhi Chief Minister Arvind Kejriwal stated that the Government of Delhi is in an advanced stage of  launching its Startup Policy.

i.In September 2019, TiE’s report noted that Delhi is home to around 7, 000 start-ups.The total value of these startups comes to around USD 50 Billion making Delhi  a region with a vast number of active startups in India.

ii.He stated that between January and June, 2020 109 startups were established in Delhi which is the highest in India.

iii.Delhi is home to 13 unicorns in India some of them are PayTM, Oyo and Zomato.

iv.To further improve the ease of access, Delhi Government is planning to set up a business park which is a few minutes away from Delhi airport. It will be the 1st of its kind establishment.

i.Noting that, India is in a top position in designing and manufacturing digital products which can cater to the demands of the Global market.

ii.Software as a Service (SaaS) will rise in India through growth of Cloud based services.

Anil Agarwal Foundation has partnered with Bill & Melinda Gates Foundation to end all forms of hunger and malnutrition by 2030.

i.The foundations  will work together on Project Nand Ghar, an initiative of Anil Agarwal Foundation & Ministry of Women and Child Development (MoWCD) to achieve United Nations Sustainable Development Goal 2 (abolishing all forms of hunger and malnutrition by 2030).

ii.The projects aim to modernize infrastructure and focus on service to eradicate child malnutrition, access to quality healthcare and to empower women by providing skill development.

i.Bill Gates, Founder of Microsoft Corporation was presented with TiE Life-time Achievement Award for contribution to the computing world and also for co-founding the Bill & Melinda Gates Foundation which funds global health and development programs.

i.It is a non-profit Agency from Silicon Valley.

ii.It supports start-ups through networking and raising of capital for new and experienced entrepreneurs.

About The IndUS Entrepreneurs (TiE):