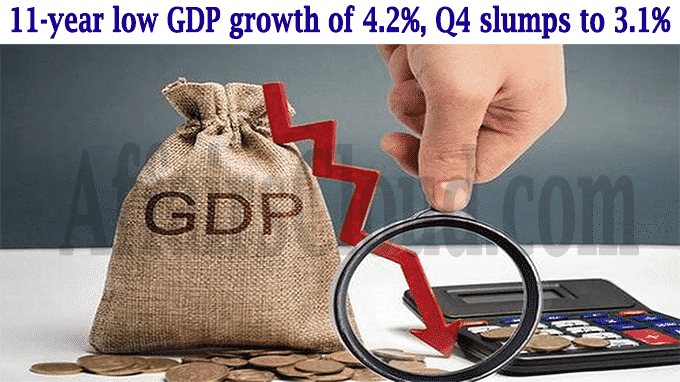 On May 29, 2020 According to the Provisional Estimates of National Income for the financial year 2019-20 by National Statistical Office(NSO), Ministry of Statistics and Programme Implementation(MoSPI) India’s Gross Domestic Product(GDP) growth has slowed to an 11-year low of 4.2% in 2019-20 & in the final quarter(Q4- January to March) the GDP’s growth rate fell to 3.1%, against 6.2% in the 2018-19, which reflects the impact of the first week of the COVID-19 lockdown which began on March 25.

i.This is regarded as the lowest growth rate in the last 44 quarters, it is still higher than the 2.2% growth predicted by most economists and rating analysts.

ii.RBI had pegged the GDP growth for 2019-20 at 5% as projected by the NSO in its first and second advance estimates released earlier this year in January and February respectively

iv.The nominal GDP growth rate, which accounts for inflation, is estimated to have grown at 7.2 % in 2019-20, sharply lower than 11 % in the previous year.

i.Manufacturing contracted by 1.4% in the fourth quarter as factories shut toward the end of March. Agriculture and public administration grew 5.9% and 10.1%, respectively. Construction contracted 2.2% & the financial sector saw only a 2.4% rise. Mining sector grew 5.2%.

ii.Cement output fell 86% while fertilisers and crude oil shrank 4.5% and 6.4%, respectively, in April. The decline in electricity generation worsened sharply to 22.8% in April from 8.2% in March.

iii.The output of 8  infrastructure sectors contracted by 38.1 % in April against 5.2 % growth year-on-year. The eight core industries comprise 40.27 % of the weight of items included in the Index of Industrial Production (IIP).

iv.Barring agriculture recorded a growth of 4 % in FY20 as against 2.4 % in the previous year

Note– 5 years before the 2008 crisis, India had  maintained an 8% GDP growth, so the capacity to endure and recover was stronger. Currently it is facing  a weaker economy and much weaker public finances and fiscal capacity.

Just about a month ago, the International Monetary Fund(IMF) had projected India’s GDP growth in the year to be 1.9%.

According to the Controller General of Accounts(CGA) data, the fiscal deficit for 2019-20 which signifies the gap between government revenue and expenditure has  widened to 4.59%(~4.6%) of GDP, higher than the revised estimate of 3.8 %.

ii.The fiscal deficit for April reached 35.1% of the FY21 target of Rs 7.96 lakh crore due to lower revenue, which was hit hard as economic activity came to halt after the lockdown was imposed to contain the spread of Covid-19.

iv.The fiscal deficit, or the gap between the government’s revenue and expenditure, came in at Rs 9.35 lakh crore in March, which was 22% higher than the targeted Rs 7.66 lakh crore.

Reason for increase in the fiscal deficit– It is mainly due to the shortfall in revenue collection during 2019-20, the revenue receipts during the year was 90 % of the revised estimate.

Static:
NSO– It is responsible for conducting large scale sample surveys in diverse fields on an All India basis.
Controller General of Accounts– Soma Roy Burman