On 12 January 2020,As per the Chief of the Indian Air Force (IAF), Air Chief Marshal Rakesh Kumar Singh (RKS) Bhadauria,the induction ceremony of a Sukhoi-30 MKIs (Su-30 MKI) squadron in the southern skies will take place in the presence of Union Defence Minister Rajnath Singh at Thanjavur in Tamil Nadu (TN) on January 20,2020. 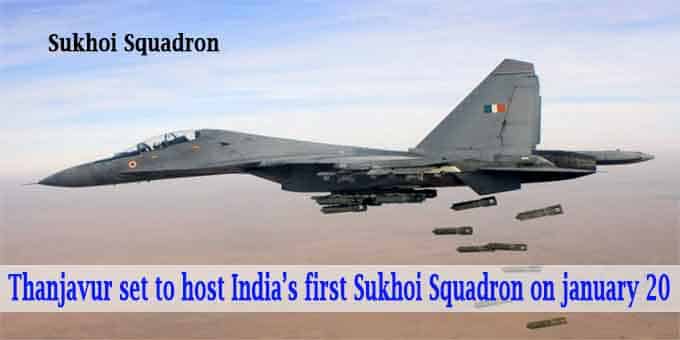 i.The range of this will be in the Indian ocean region (IOR) up to Suez Canal.

ii.It will be the IAF ‘s 2nd  frontline fighter squadron based in South India, with the most potent platform capable to perform predominantly maritime role and certainly a secondary to all other defensive mechanism. Earlier, the number-45 Flying daggers squadron has been deployed at the Sulur Airport in Coimbatore,TN.

iii.The Indian Air Force ‘s 222 Squadron, ‘The Tigersharks’ has been resurrected with state-of-the-art Sukhoi-30 MKI multirole fighter aircraft. Raised on 15 September,1969  with the Sukhoi-7, the squadron was later equipped with MiG 27 ground attack aircraft before being canceled in 2011.

222 squadron to be operationalised with Brahmos equipped Sukhoi-30
India has equipped Sukhoi-30 MKI with BrahMos, one of the world’s super missiles. The ‘Tigersharks’, equipped with modern air superiority fighter aircraft, which are armed with 2.5 ton air-launched BrahMos missile of 300 km range,have the capability of carrying out a variety of missions such as ground attack, sea attack

i.After the deployment of BrahMos-equipped Sukhoi-30 at Thanjavur, not only will the air force of the Air Force increase, but India will be ready to destroy enemy targets 24 hours in any season on the ocean or on land.

ii.Background: Thanjavur air Force Station (AFS) dedicated to the nation on May 27, 2013. It was mandated to safeguard various strategic and economic assets in the Southern Peninsula and the Indian Ocean. Sukhoi-30 has been operating from this airport during the last 6 years.