On January 14, 2020, South Central Railway (SCR) Zone of Indian Railways has signed an MoU (memorandum of understanding ) with State Bank of India (SBI) for ‘doorstep banking’ under which the bank will collect earnings generated from all 585 stations of the zone. 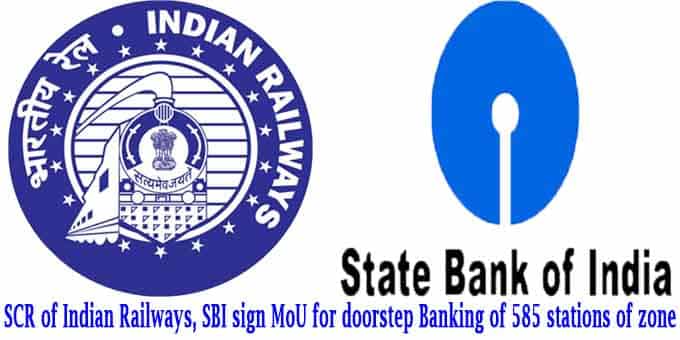 i.Till now, the railways used to send cash received at their stations to the bank in the safes by train. There was risk in this work and it was extremely difficult. It also consumes human labor.

ii.Key benefits of the MoU:

i.Equal remittance mechanism will be developed in all railway stations.

ii.Real time information will be available about the cash being deposited by various stations, which will facilitate accountability.

iii.Avoidance of unwanted accumulation of cash at railway stations.

iii.The cash deposited at the small railway stations is sent through guards to the larger stations, while the cash from the larger stations is sent to the respective commercial inspectors of the predetermined nearest bank. In order to reach the cash safely, the personnel of Railway Protection Force (RPF) had to be sent for security along with the employee. Now the labor force of the employees will be saved under the new system.

About State Bank of India (SBI):
Founded- 1 July 1955 (as SBI)
Headquarters- Mumbai, Maharashtra
Chairman- Rajnish Kumar
Tagline- With you all the way, Pure Banking Nothing Else, The Nation’s banks on us.