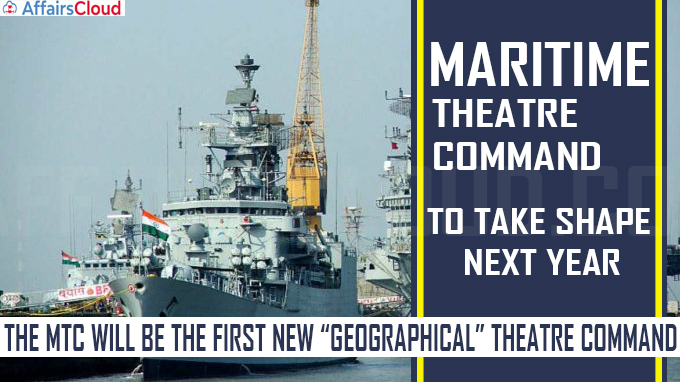 As per a plan prepared by a group headed by Navy Vice Chief Vice Admiral G Ashok Kumar, India’s 1st Maritime Theatre Command (MTC) will get its final shape in 2021. It will be the first new “Geographical” Theatre command to be created as part of military restructuring plans.

The Headquarters of the MTC will be set up at Karwar Naval Base, Karnataka and will be headed by a Vice Admiral (3-Star Naval Officer).

i.The creation of MTC will boost joint operations and integration and application of force in the maritime domain. It will be responsible for the security of India’s 7,516 km coastline, 1, 382 islands  and Indian Ocean Region (IOR).

ii.The objective behind creation of MTC is to build an integrated land-air-sea fighting machinery.

ii.It will have 2 sub-theatres, one each for West & East regions.

iii.MTC will consist of elements from Indian Army and the Indian Air Force (IAF) under its operational control.

iv.The Vice Admiral will report directly to the Joint Chiefs of Staff Committee led by Chief of Defence Staff (CDS).