Dear Readers,we have collected some important information about Indian Railways. We hope, it will help you in Competitive exams. 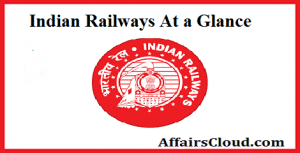 Indian Railways  is an Indian state-owned enterprise, owned and operated by the Government of India through the Ministry of Railways. It is one of the world’s largest railway networks comprising 115,000 km and 7,112 stations.