On May 9, 2017, two minesweepers of Indian Navy – INS Karwar and INS Kakinada, were decommissioned at the Naval Dockyard in Mumbai in presence of Indian Navy Chief Sunil Lanba.

Minesweeper ships are used by naval forces across the world to secure the harbours by locating and destroying mines. Minesweepers are large and heavily armed ships. Besides undertaking minesweeping missions, they also serve as anti-submarine warfare escort.

INS Karwar (Identification – M67) was acquired from the erstwhile USSR.

INS Kakinada (Identification – M70) was also acquired from erstwhile USSR and was commissioned at Riga on December 23, 1986. 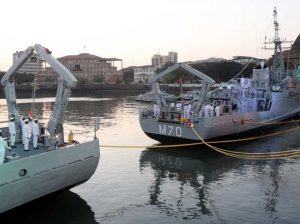 With the decommissioning of the INS Karwar and INS Kakinada, the India Navy now has a fleet of only four Soviet-origin minesweeping ships. These four ships are INS Cannanore, INS Cuddalore, INS Kozhikode and INS Konkan. These ships too will be decommissioned by the end of year 2018.