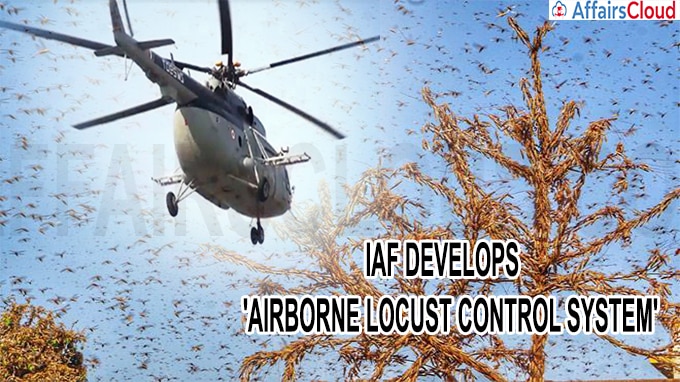 Locust attack is continuously increasing in many states of the country, largely in northern states. The central government has come forward to help the states to protect farmers’ crops from locusts. Now the help of the Indian Air Force (IAF) will also be taken in this work.

In this sequence, on June 30, 2020, Chandigarh based 3 Base Repair Depot (BRD) of the IAF and Central Scientific Instruments Organisation (CSIO) have indigenously developed an Airborne Locust Control System (ALCS) for two Mi-17 helicopters for spraying atomised pesticide malathion to arrest locust breeding.

Trial: A team of pilots and test engineers from Aircraft and Systems Testing Establishment has successfully carried out trials on ALCS ground on Mi-17 chopper in Bengaluru, Karnataka.

Background: The Airforce has made an agreement few months ago with a UK (United Kingdom) based company M/s Micron to install pesticide spray tanks and nozzles, including pumps, but the company could not provide services due to Coronavirus (COVID-19) pandemic.

Mi-17 Helicopter made in Russia is considered very powerful. This two-engine chopper can fly at a maximum speed of 260 kilometers per hour. It can carry 24 jawans in addition to two pilots simultaneously. It is capable of carrying 4000 kg.

The Union Agriculture and Farmers’ Welfare Minister Narendra Singh Tomar has flagged off a Bell 206-B3 helicopter from Greater Noida (Uttar Pradesh) for effective control of crop threatening locusts in the worst affected areas in Rajasthan.

The Bell helicopter can cover an area of ​​about 25 to 50 hectares in one flight with a pesticide capacity of 250 liters.

i.The helicopter flew from Greater Noida to Uttarlai air base of Barmer initially, and will be deployed for locust control in desert areas of Barmer, Jaisalmer, Bikaner, Jodhpur and Nagaur.