On February 10,2020, The Union Cabinet Minister for the Ministry of Environment, Forest and Climate Change and for the Ministry of Information and Broadcasting Shri Prakash Keshav Javadekar announced that the 13th Conference of Parties (COP) of the Convention on the Conservation of Migratory Species (CMS) of Wild Animals, an Environment Treaty Supported by United Nations Environment Programme (UNEP) is going to hosted by India at Gandhinagar in Gujarat, from 17th – 22nd February 2020. Representatives from 130 countries, conservationists and International NGOs working in the field of Wildlife conservation will be attending the conference. 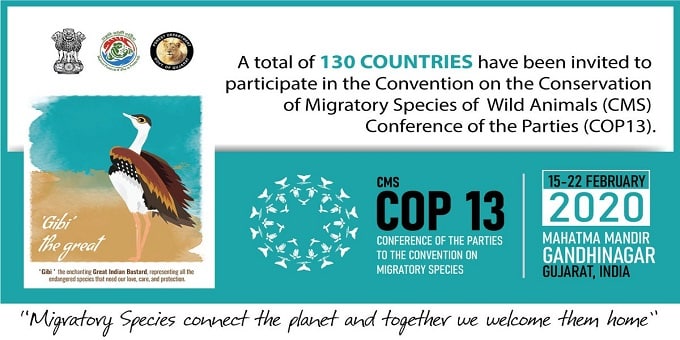 i.India unveils the logo and Mascot for the 13th CMS COP 2020, and the logo is Inspired by “Kolam” a Traditional art form of Southern India and the kolam art is used to Portray Important Migratory Species in India like Amur falcon, Humpback Whale and Marine Turtles, and the Great Indian Bustard (Gibi) is chosen as official Mascot.

ii.The theme for the CMS COP 13 in India is, “Migratory species connect the planet and we welcome them Home”, On February 15th and 16th India is going to conduct Pre-COP meeting where Stakeholder Dialogue, High level meeting and also the Champion Night Award Ceremony are going to take place and on February 17th opening Ceremony and plenary session followed by some International  Organizations will showcase wildlife conservation practices and side events are going to held till the closing ceremony on 22nd February.

iii.The Government of India is Signatory to the Convention on Conservation of Migratory Wild Animals (CMS) Since 1983 and also the Indian sub-continent is also part of the major bird flyway Network (Central Asian Flyway) between Arctic and Indian Ocean.

v.It is stated that India is going to discuss about the Inclusion of Asiatic Elephant and Great Indian Bustard in the CMS Appendix for concerted action on CMS COP 13, India takes over COP CMS presidency from Philippines and will hold presidency till 2023.
About United Nations Environment Programme (UNEP)
Headquarters  – Nairobi, Kenya
Executive Director – Inger Andersen