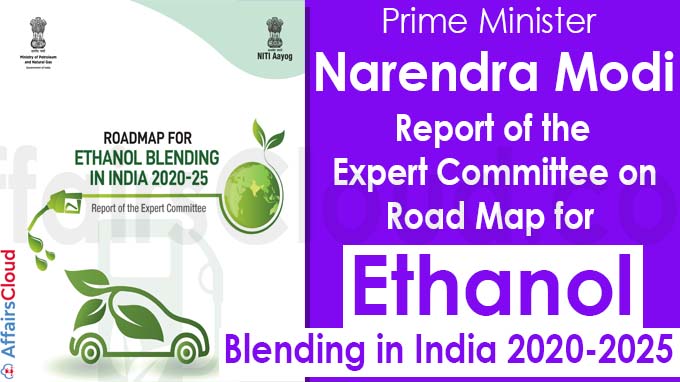 Event’s Theme: ‘promotion of biofuels for a better environment’.

i.The report is provided by NITI Aayog (National Institution for Transforming India) and MoPNG, which lays out a comprehensive roadmap for the development of the ethanol sector.

iii.In June 2021, the Oil Ministry had issued a gazette notification mandating start of up to 20 percent blending of ethanol in petrol from April 1, 2023. All petrol sold in the country is targeted to have 20 percent ethanol by 2025.

i.Pilot project: PM launched a pilot project of E-100 dispensing stations at 3 locations in Pune, Maharashtra. for the production and distribution of ethanol across India.

ii.Govt has released the E-20 Notification directing Oil Companies to sell ethanol-blended petrol with a percentage of ethanol up to 20 percent from 1st April 2023, and BIS () Specifications for higher ethanol blends E12 & E15.

-India’s 1st e-vehicles-only city to be developed in Kevadia, Gujarat

i.The PM stated about the plans underway to develop India’s 1st electric vehicle(EV) city at Kevadia, Gujarat. The city also has the 182-meter statue of Sardar Vallabhbhai Patel popularly known as the Statue of Unity.

ii.The Statue of Unity Area Development and Tourism Governance Authority (SOUADTGA) is empowered to execute development plans and manage tourism in the area around the statue of Sardar Vallabhbhai Patel. Gujarat Energy Development Agency (GEDA) will assist with the project.

iii.Way forward: Women drivers will be given free driving training at the Skill Development Center at Kevadia free of cost and an E-vehicle maintenance workshop and charging station was also planned to be set up there.

i.India is one of the top 5 countries in the world in terms of installed renewable energy capacity.

i.As part of its commitments to the United Nations(UN) Framework Convention on Climate Change adopted by 195 countries in Paris in 2015, India plans to reduce its carbon footprint from the 2005 levels by 33-35 percent by 2030.

ii.About 98% of the fuel requirement in the road transportation sector is currently met by fossil fuels and the remaining 2% by biofuels.

iv.Change over: Until now, ethanol was being produced in sugar-growing states, but now it was planned to be produced across the country with the setting up of foodgrain waste distilleries and agricultural waste ethanol plants.

It is one of the principal biofuels, which is naturally produced by the fermentation of sugars by yeasts or via petrochemical processes such as ethylene hydration. It has medical applications as an antiseptic and disinfectant. It is used as a chemical solvent and in the synthesis of organic compounds, apart from being an alternative fuel source.

Prime Minister (PM) Narendra Modi has released the 8th installment of funds to beneficiaries under the Pradhan Mantri Kisan Samman Nidhi (PM-KISAN) scheme. Around ~INR 20, 667 Crore was distributed to around 9.5 Crore farmer beneficiaries in the 8 installment.