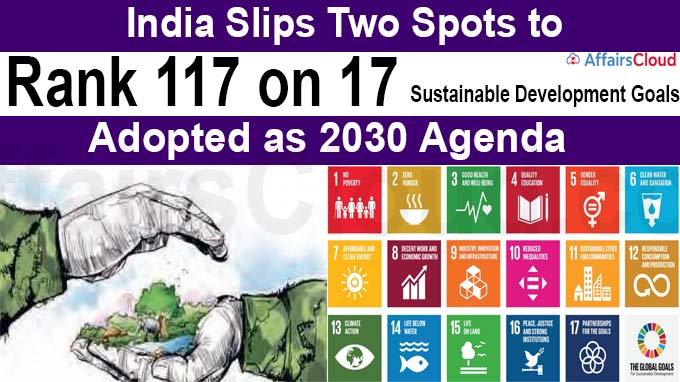 As per the State of India’s Environment Report, 2021, which was released by the Centre for Science and Environment (CSE), India’s rank has dropped by 2 places from last year’s 115 to 117 on the 17 Sustainable Development Goals (SDGs), which are adopted as a part of the 2030 agenda by 193 United Nations(UN) member states in 2015.

i.Kerala, Himachal Pradesh and Chandigarh were the best states with an overall score which are on the path to achieving the SDGs.

i.As per the report, in 2020, 39 lakh people in India were displaced due to climate disasters and conflicts, making it the 4th worst-hit country in the world to have such a high number of internal displacements(ID).

ii.The top 3 countries with high ID were China, the Philippines and Bangladesh, where over 4 million people were displaced.

iv.An average of around 3.73 million people were displaced in a year between 2008 and 2020(majority by flooding during the monsoon).

i.In terms of the Environmental Performance Index (EPI) 2020 by Yale University and Columbia University, India has ranked 168 out of 180 countries with a score of 27.6 out of 100. While Denmark has topped the list with a score of 82.5.

ii.In the same EPI 2020, India ranked 148, 21 positions behind Pakistan (127) in the category of biodiversity and habitat which assesses countries’ actions toward retaining natural ecosystems and protecting the full range of biodiversity within their borders. Click here to know more

According to the State of India’s Environment 2021 (SoE 2021) Annual report released by Down to Earth Magazine in association with CSE, India is set to begin a ‘pandemic generation’ as 375 million children (0-14 year-olds) may suffer long-lasting impacts such as underweight, stunting & increased child mortality, to losses in education & work productivity due to pandemic.

About Centre for Science and Environment (CSE):

It is a public interest research and advocacy organisation, that researches into lobbies for and communicates the urgency of development that is both sustainable and equitable.
Headquarters – New Delhi
Founder – Director – Anil Kumar Agarwal
Director General – Sunita Narain