India successfully test-fired it’s indigenously developed nuclear capable Prithvi-II missile, which has a strike range of 350 km, as part of a user trial by the Army.The missile test was carried out from a mobile launcher from launch complex-3 of the Integrated Test Range (ITR) at Chandipur. 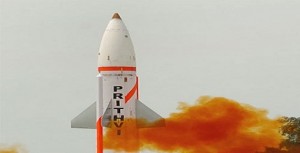 The surface-to-surface Prithvi-II missile is capable of carrying 500 kg to 1,000 kg of warheads and is thrusted by liquid propulsion twine engines. It uses advanced inertial guidance system with manoeuvring trajectory to hit its target.

The downrange teams on board a ship deployed near the designated impact point in the Bay of Bengal monitored the terminal events and splashdown.