The U.S.(United States) Chamber of Commerce’s Global Innovation Policy Center (GIPC) has released the 8th edition of International Intellectual Property (IP) Index for 2020 namely ‘Art of the possible’ which was authored by Meir Pugatch and David Torstensson. This report was conducted by Pugatch Consilum, a consultancy that provides evidence-based research, analysis, and intelligence on the fastest growing sectors of the economy. The 2020 index mapped the IP ecosystem in 53 global economies which included three new economies-Greece, Dominican Republic, and Kuwait, on the basis of 50 unique indicators. 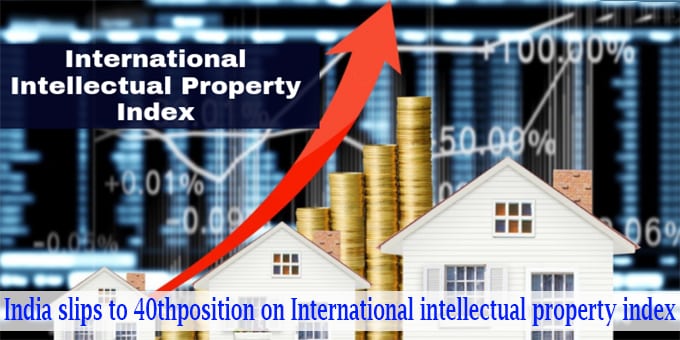 i.In 2020 GIPC’s IP Index, India’s position has downgraded to 40th rank in comparison to 36th position out of 50 countries in 2019. The index has been topped by the United States (US) followed by UK (United Kingdom), Sweden, France and Germany.

ii.Among Asia, India is ranked 4th  which is topped by Australia and followed by Brunei (2nd) and China (3rd).

iii.Among Lower-middle-income economies, India is at 2nd position which is topped by Egypt.

i.Implementation of the (National IP Rights) Policy has improved the speed of processing for patent and trademark applications

iii.Increased awareness of IP rights among Indian innovators and creators.

iv.Provided new regulatory tools to facilitate the registration and enforcement of those rights.

Areas where India is lacking:
There are hurdles in the areas of patent eligibility and enforcement.

About Global Innovation Policy Center:
It is the principal institution of the United States Chamber of Commerce handling all issues relating to innovation and creativity.
Initiated– 2007
President and CEO– David Hirschmann
Headquarter– Washington DC, US