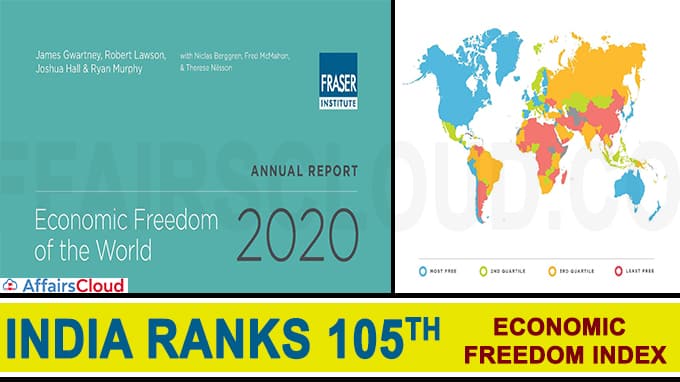 India took the 105th position in the 24th Edition of Economic Freedom of the World: 2020 Annual Report by Canada’s Fraser Institute, which has been released in India in conjunction with Center for Civil Society, New Delhi-based think tank. The report is co-published by CATO Institute (America) with more than 70 think tanks around the world.

This is the 24th edition of Economic Freedom of the World.The report is based on 2018 data. Hong Kong topped the Index with a score of 8.94, followed by Singapore (8.65) and New Zealand (8.53). This year’s publication ranks 162 countries and territories for 2018. The Report has been divided into 4 Quartiles based on the rankings.

i.The degree of freedom is measured in five broad areas. They are:

i.In order to increase Economic Freedom in India, it has to depend on next generation reforms in factor markets and openness to International Trade.

iv.The Rankings were based on 2018 data and many new restrictions on international trade, tightening of the credit market due to Non-Performing Assets (NPAs) and COVID-19’s impact on debt and deficits did not reflect in India’s score.

v.India has been ranked higher than China, which stands at the 124th position.

The Nations in the top Quartile of Economic Freedom had an average per capita Gross Domestic Product (GDP) of US $ 44, 198 in 2018, compared to $ 5, 754 for bottom quartile nations.