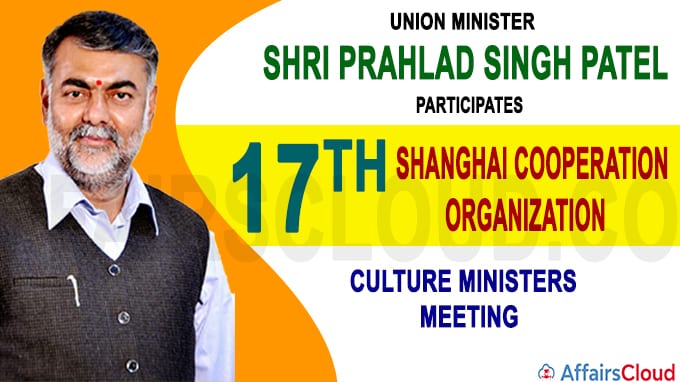 Discussions were held on the role and place of culture during the Global Crisis and the prospects for developing multilateral cultural cooperation within SCO.

i.The Culture Minister highlighted that one of the important aspects that unites and connects members of SCO countries is the shared heritage of Buddhist philosophy and art.

i.National Museum of India is in the process of organizing the first SCO Exhibition on Shared Buddhist Heritage in 2020 to promote mutual bonding.  It will be held online due to the pandemic.

ii.The Exhibition will mark India’s Chairpersonship of Council of Heads of Government in 2020.

i.On the motive of sharing our literature works with SCO nations, Sahitya Akademi,India’s National Academy of letters will translate ten Indian literary works into SCO languages such as Russian and Chinese.

ii.The translated works would be released during the upcoming Council of Heads of Government Meeting to be hosted by India in 2020.

iii.National Gallery of Modern Arts will host collaborative programmes such as virtual exhibitions, online art workshops and dialogues with museum professionals and artists to discuss ways to make the partnership stronger and to discuss the role of museums/institutions for the future.

India supports proposal of declaring 2021 as Year of Culture:

i.The year 2021 will mark the 20th Anniversary year of the founding of SCO. India supported the proposal of declaring 2021 as the Year of Culture of SCO to celebrate the Anniversary.

ii.Indian Council for Cultural Relations (ICCR) expressed its willingness to be part of 2021 year of SCO culture by organizing festivals/performance of Indian culture, Conference & Seminars and sponsoring Indian speakers as part of celebration in Member states of SCO. It is also planning to organize a Film Festival to commemorate the occasion.

i.On January 13, 2020 the secretary general of the Shanghai Cooperation Organisation (SCO) Vladimir Norov announced that India has been selected to host the SCO’s annual meeting of council of heads of government for the 1st time.