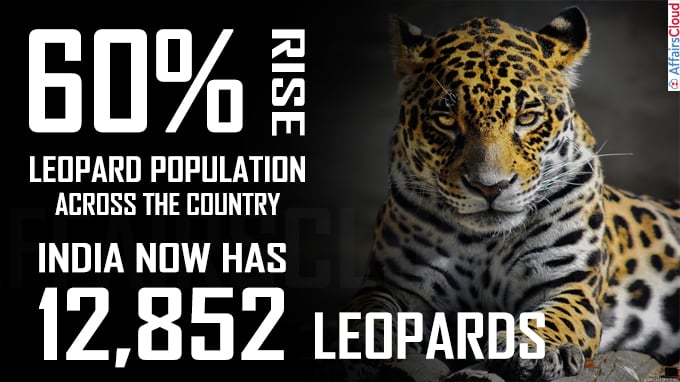 On December 21, 2020, Union Minister for Environment, Forest & Climate Change (MoEFCC), Prakash Javadekar released the ‘Status of Leopards in India, 2018’ report. The report states that India has recorded a 60% rise in Leopard population across the country and it now has 12, 852 Leopards. The states Madhya Pradesh (3, 421), Karnataka (1, 783) & Maharashtra (1, 690) recorded the most number of leopards.

iv.The study has highlighted the increase in population of  Asiatic lions and tigers in the country.

v.Around 100 Tigers have been found in the forests of the North Eastern States.

The full report can be accessed here.

i.It is listed as ‘Vulnerable’ by the International Union for Conservation of Nature (IUCN).

ii.It is listed in  Appendix I of Convention on International Trade of Endangered Species of Wild Fauna & Flora (CITES).

iii.It is protected in India under Schedule I of the Wildlife (Protection) Act 1972, India which is the highest level of protection for animals in India.

i.NTCA was established in 2005 is a statutory body under the MoEFCC.

ii.It was set up  on recommendations of the Tiger Task Force.

iii.It was constituted under Wildlife (Protection) Act, 1972, as amended in 2006, for strengthening tiger conservation.

i.November 10, 2020, WII in the 2nd phase of its survey of the entire main stem of Ganga river found that 49% of the river has high biodiversity and increased biodiversity sightings.

ii.August 5, 2020 India’s 1st snow leopard conservation centre is to be set up in Lanka, near Bhaironghati bridge in Uttarkashi district, Uttarakhand.

About  Wildlife Institute of India (WII):

WII is an Autonomous Institution of the MoEFCC.

NTCA has been constituted under Wildlife (Protection) Act, 1972.