India ranks 136th among 180 countries in the 2017 ‘World Press Freedom Index’ released by Reporters Sans Frontières (RSF) also known as Reporters Without Borders. In 2016 India ranked 133rd on this index.

India’s dismal performance has been attributed to self-censorship which journalists have imposed upon themselves, as they fear that their opinion will be misinterpreted by radical nationalists and consequentially they will be subjected to physical threats and prosecution. 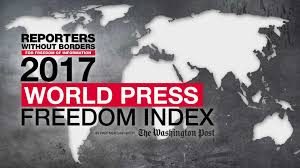 The report specifically mentioned about the internet ban in Kashmir during protests in July 2016.