According to a report by United Nations Environment Programme (UNEP), India had the highest share of welfare costs (loss of income from labour), of about $220 billion in South and South-East Asia from mortality due to air pollution.

UNEP’s report, ‘Towards a pollution-free planet’, was launched during the first Conference of Parties for the Minamata Convention in September 2017. 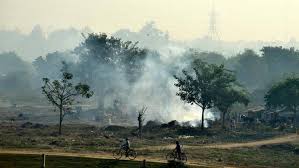