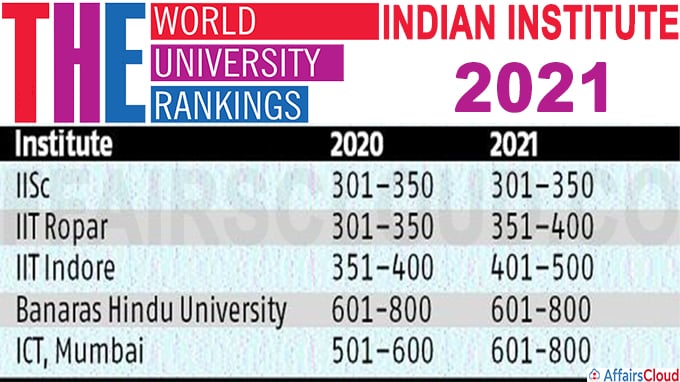 On 2nd September 2020, United Kingdom(UK) based Times Higher Education(THE) released the World University Rankings 2021.Indian Institute of Science(IISc) Bengaluru  ranked under the 301-350 group ranking, tops among the 63 Indian institutions which were qualified for the THE rankings. IIT, Ropar which is under the 351-400 group rankings and IISc Bengaluru are the only Indian institutes in the world top 400 Universities.

i.The rankings are made based on 13 performance indicators that measure the performance of the institute across 4 areas which are, teaching, research, knowledge transfers and international outlook.

ii.THE ranking includes around 1500 universities from 93 countries and regions.

iii.The 2021 ranking analyzed more than 80 million citations over 13 million research publications and the response from around 22000 scholars across the globe.

i.The United States of America is the most represented country with 59 institutes in the top 200 rank followed by the United Kingdom (29) and Germany (21).

ii.China doubled its representation in the top 100 since 2020 rankings with 3 additional entries (totally 6 institutes) and Tsinghua University, China tops the asian institute with an overall rank of 20.

i.Top 7 IITs of India boycotted the 2021 rankings of THE due to their concern about the transparency of the process.

ii.Indraprastha Institute of Information Technology, Delhi; King George’s Medical University, Lucknow and the Mahatma Gandhi University, Delhi ranked the highest among the institutes that debuted in the THE ranking in 601-800 group

iii.The Indian Institutes are placed low in terms of International outlook and citation impacts of research papers among the other criterias.

i.Times Higher Education(THE)’s 2nd edition of Impact rankings 2020: The Indian Institute of Technology(IIT) Kharagpur has secured 57th rank with a score of 87.9 among global universities. The list is topped by the University of Auckland, New Zealand with a score of 98.5.

ii.Times Higher Education(THE) Asia University Ranking launched on 4th June 2020, Indian became the Third most represented country with 8 institutes in the top 100.Indian Institute of Science(IISc) with 36th position on the list retains its top position in India.