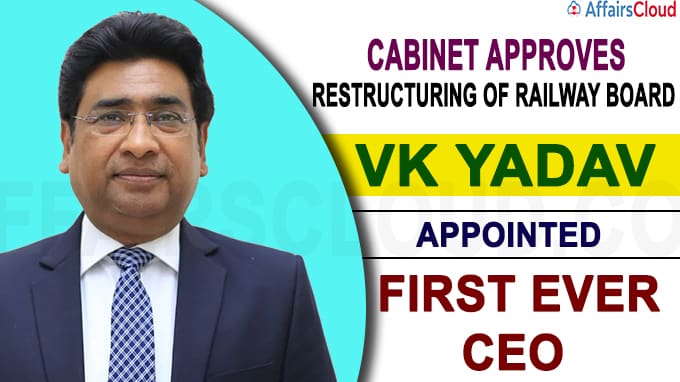 The Appointments Committee of the Cabinet (ACC) has approved the organizational restructuring of the Indian Railways, which includes the merger of eight Group A services and also approved the appointment of the current chairman of the Railway Board V K Yadav as the first ever Chief Executive Officer (CEO) of IR.Along with the CEO post he also holds the chairman post.

i.The 8 Group A services will be consolidated into a central service called the Indian Railway Management Service(IRMS).

Benefits of the Restructure

The restructure will end departmentalism, promote smooth working, and accelerate and promote rational decision-making and create an intelligible vision for organisation.

i.The railway board will be modified with functional lines and its strength will be shaped to make it a leaner organisation.

ii.With the consultation of the Department of Personnel and Training, the methods and consolidation of the services will be worked out. To implement this in order, a mechanism will be introduced.

ii.These departments are separated vertically, each of which are headed by a Secretary-level officer (member) of the Railway Board.

After this restructuring process , now Indian Railways has five member railway board, which includes CEO along with four members who are responsible under Infrastructure, Operations & Business Development, Rolling Stock and Finance.

i.In addition to VK Gupta, 4 others have been appointed namely;

ii.As per the ACC, the post of Member (Rolling Stock) has been utilized to create the post of Director General-DG (HR) in apex grade.

iii.The cadre controlling officer(chairman and CEO) will be responsible for human resources (HR) with assistance from a Director General level officer.

According to the decision of the Cabinet, with this rearrangement three apex level posts, namely; Member (Staff), Member (Engineering) and Member (Materials Management) in the Railway Board have been surrendered.

i.Union Cabinet chaired by the Prime Minister Narendra Modi approved the first education policy of the 21st century i.e. National Education Policy (NEP) 2020 which has replaced 34 years old NPE, 1986. With this, the Ministry of Human Resource Development (MHRD) will officially be renamed the Ministry of Education (MoE).

ii.The Union Cabinet chaired by the Prime Minister, Narendra Modi has given ex-post facto approval to Memorandum of Understanding (MoU) signed between India and Zimbabwe on Cooperation in the field of Traditional Systems of Medicine and Homeopathy, which was signed on November 3rd, 2018.