On January 10, 2020, According to the report, ‘India 2020 Energy Policy Review’ which covers the key energy sectors of oil, natural gas and electricity and identify the main energy security issues, released by the International Energy Agency (IEA) in collaboration with NITI (National Institution for Transforming India) Aayog, India will overtake China by mid-2020 in terms of crude oil demand growth. 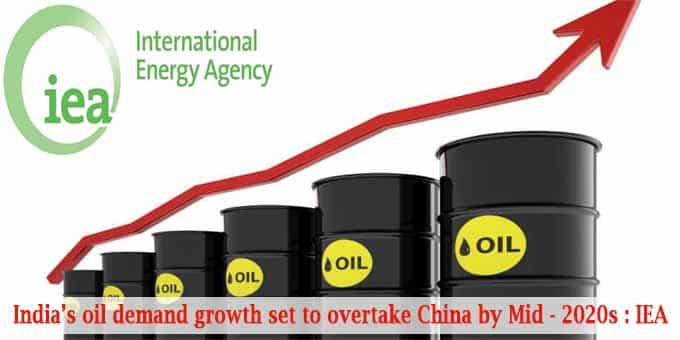 ii.India’s crude oil demand will increase due to increased consumption in the transportation, cooking fuel and petrochemicals industry.

iii.India is the 3rd largest consumer of crude oil after China and the United States(US) , the 4th largest refiner and net exporter of refined petroleum products.

v.Natural gas: India aims to increase use of gas from the current 6.2% to 15% by 2030.The use of gas has increasing in residential and transport sectors of India.
By taking the effective steps, India has avoided an additional 15% of annual energy demand & 300 million tonnes of CO2 emissions between 2000 &2018.

vi.Policy Governance:The report highlighted the achievements made through the country’s energy policies such as LED programme & praises the government’s decisions to allow private-sector investment in coal mining, and to open up the country’s oil and gas retail markets. India’s per-capita emissions stood at 1.6 tonnes of CO2, which remains well below the global average of 4.4 tonnes.

vii.Renewable energy: India installed a total of 84 GW (Giga watt) of grid-connected renewable electricity capacity by December 2019 & sets a target of 175 GW of renewables by 2022.

viii.India’s energy demand from air conditioners is expected to 1 billion by 2050
So the report stresses India to add massive amounts of power generation capacity to meet the demand.