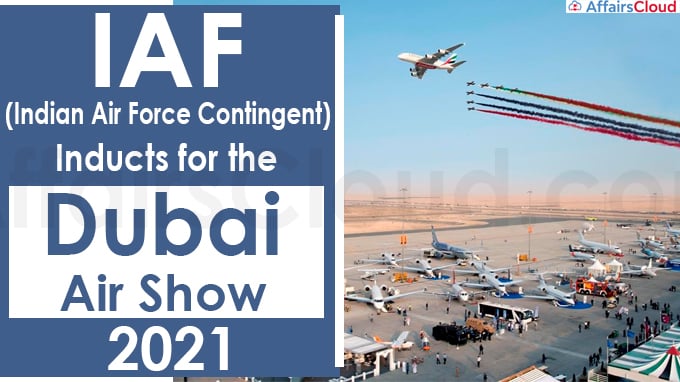 The Biennial Dubai Air Show, that was held from 14th to 18th November 2021 at the Al Maktoum International Airport in Dubai, saw the participation of Indian Air Force (IAF) Contingent. The IAF contingent took part in the aerobatics and static displays, in the Air Show that also witnessed global participation including Saudi Hawks, Russian Knights & UAE’s Al Fursan.

It was held under the patronage of His Highness Sheikh Mohammed bin Rashid Al Maktoum, Vice President and Prime Minister of the UAE, the Ruler of Dubai and the UAE Minister of Defence.

i. The Government of United Arab Emirates (UAE) has invited the IAF contingent to participate in the Air show.

iii. The induction was supported by the IAF’s C-17 Globemaster IIIs and C-130J Super Hercules.

On 16th November, Indian Airline company Akasa Air, owned by SNV Aviation, is backed by ace stock investor Rakesh Jhunjhunwala placed an order for 72 Boeing 737 Max at the Dubai Air Show. The $9 billion worth order includes 2 versions of the Boeing Max Aircrafts: 737-8 and the high-capacity 737-8-200, that are expected to be under operation by 2022.

i. This is the 1st procurement of Boeing 737 Max by an Indian company, after the Directorate General of Civil Aviation (DGCA) gave approval for the use of MAX aircrafts.

ii. Previously, In March 2019, the Boeing 737 Max were globally grounded following the two crashes in Indonesia and Ethiopia within 5 months.

In October 2021, the Ministry of Civil Aviation gave NOC (No Objection Certificate) to SNV Aviation Pvt Ltd to operate commercial flights across India under the brand name ‘Akasa Air’ from summer 2022.