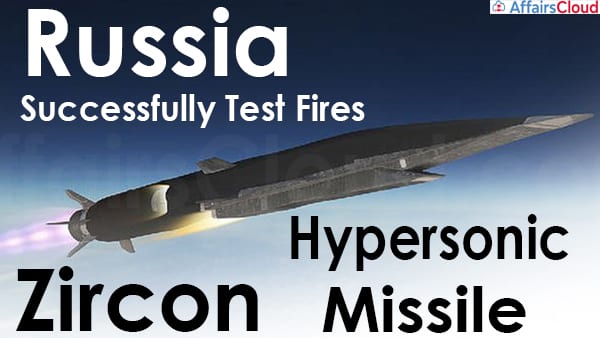 i.The Missile will be commissioned by the Russian Navy in 2022, to most of its cruisers, frigates & submarines.It is one of the newest additions to the rustic’s arsenal of guns known as “invincible”.

Note – In 2014, Russia annexed the Crimean Peninsula from Ukraine.

On 15th November, Russia destroyed its own satellite in low-earth orbit using an Anti-Satellite (ASAT) Missile named ‘Nudol’, which led to formation of a cloud of space debris that could potentially destroy other orbiting satellites & the International Space Station (ISS).This test is the first of its kind involving a direct-ascent ASAT missile by Russia against a live satellite target.

i. This is Russia’s 1st successful intercept of a satellite.

ii. The Satellite destroyed was a defunct Soviet satellite called Cosmos 1408, that hasn’t been operational since the 1980s.

iii. In 2007, China conducted a similar test & destroyed its own satellite, whose debris is still orbiting.

How does ASAT work?

The Missile that is designated to destroy the satellite will be placed in the projectile of the satellite, which approaches & hits the missile at a speed of around 27,000 km per hour

In February 2021, Russia launched ‘Arktika-M’, the 1st satellite to monitor climate change in the Arctic Region.