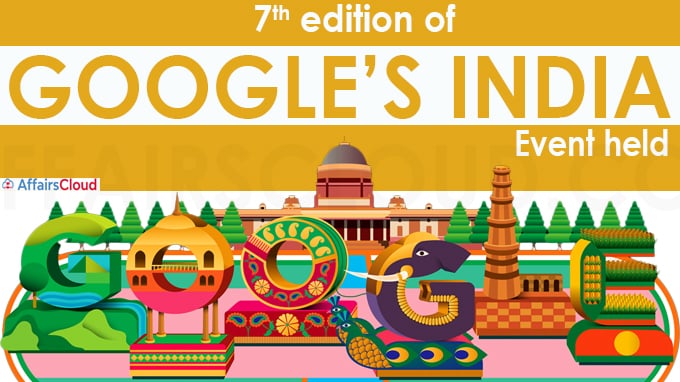 Google has announced the 7th edition of its Google for India event 2021. The event was held virtually on November 18, 2021. The event emphasizes making the internet safer for a billion Indians and empowering the country to become a leading digital economy.

b.Google rolled out Pay-via-Voice feature in Google Pay, which will allow transfer of money directly to your bank accounts using voice command. This feature will be available to all users.

i.Google announced its support of voice-assisted bookings for vaccinations on the COWIN platform with the help of the Google Assistant.

ii.This feature will work in English and 8 Indian languages including Hindi, Gujarati, Kannada, Malayalam, Bengali, Marathi, Tamil, and Telugu. It will be executed in early 2022.

i.Google Search was now enabled to show results in more Indian local languages, especially when a user searches in their language, instead of showing results in English on top.

ii.The new feature will ensure that Google Search translates those English pages into local languages and then displays them to the user even if the page was not originally written in the same.

iii.Currently, the feature is rolled out in 5 Indian languages including Hindi, Kannada, Tamil, Telugu, and Malayalam, with support for more languages coming soon. It can be accessed on any mobile browser that supports Google Search.

e.Google Pay with My shop and Hinglish feature:

i.Google has added the My Shop feature to Google Pay. The tool will be available to merchants using Google Pay for Business app to help them ‘digitise’ their journey.

ii.Google Pay also gets the option of using Hinglish for the app’s language settings.

f.Mitra program in partnership with Armaan:

Google partnered with non-profit Armaan for Mitra program in partnership to help benefit women who are pregnant and very often lack access to basic healthcare. With AI, the program can pinpoint who is more at risk, and make sure they access the service better.

ii.Google is collaborating with NASSCOM (National Association of Software and Service Companies) Foundation, Tata STRIVE, and Safeducate to identify underserved learners across India for a free enrolment to a Google Career Certificate of their choice.

On 13 July, Alphabet Inc. & Google Chief Executive Officer Sundar Pichai had announced an investment of $10 billion (Rs 75,000 crore) in India through the “Google for India Digitisation Fund” at the 6th Annual, Google for India Event 2020 and also a First virtual event of Google in India.