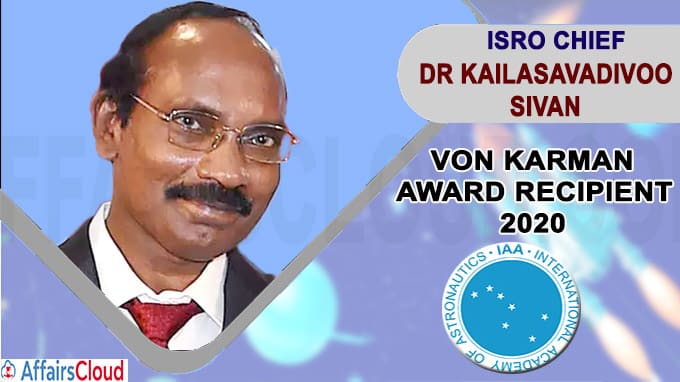 The International Academy of Astronautics(IAA) has announced Dr. Kailasavadivoo Sivan, Chief of Indian Space Research Organisation(ISRO) as the recipient of the 2020 Von Karman Award, the highest distinction of the IAA. The award will be presented to Dr. K. Sivan in March 2021 at Paris.

i.The premier award of IAA was instituted in 1982 in the memory of Dr. Theodore Von Karman, renowned aerospace scientist and the founder and the first President of IAA.

ii.The Award is annually presented to recognise the distinguished contributions and lifetime achievements in any branch of science.

ii.He worked on the mission design and strategies for PSLV which was the foundation of ISRO launch vehicles like Geosynchronous Satellite Launch Vehicle (GSLV), GSLV Mk-III and Reusable Launch Vehicle-Technology Demonstrator(RLV-TD).

iv.He became the Chairman of ISRO in January 2018 succeeding AS Kiran Kumar.

i.Prof. Udupi Ramachandra Rao was the first Indian to receive the Von Karman award. The award was presented to him in 2005.